How many TDs oppose water charges?

As we continue to wait for a government to form, several politicians and commentators have raised the point that the majority of TDs elected to the 32nd Dáil are opposed to Irish Water and the system of water charges introduced by the Fine Gael-Labour coalition government. With Sinn Féin, the AAA-PBP, the Social Democrats and the majority of independents all against water charges, and Fianna Fáil campaigning and negotiating to have the charges shelved for nine months (accusations of stolen policies aside), that does seem to be the case, so I made a map to see what this majority would look like. 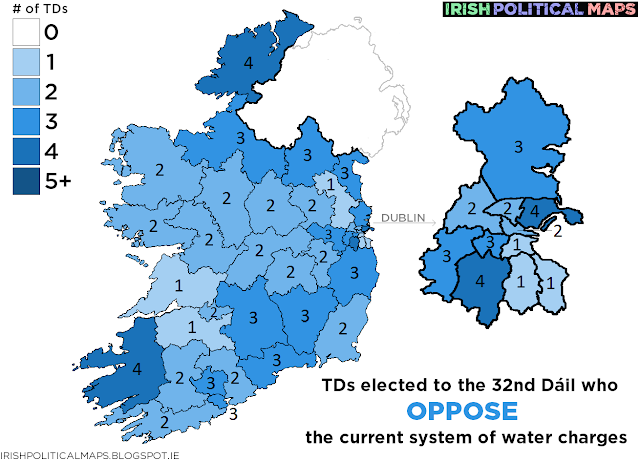 When researching for this map, I found that it wasn't always easy to get information on every TD's view of the matter. As the election results were coming through in February, Brendan Ogle of the Right2Water campaign said that 99 anti-water charges TDs had been elected. By my count, there are 95 - though I'm more than happy to adjust the map if I've made an error somewhere.

My figures are as follows:

For the retention of water charges:

For the reform or abolition of water charges:

With 95 TDs who wish to either reform or abolish the present system of water charges, and only 63 (at most) in favour of the status quo, it's clear that the mandate of the people is with those against. Whatever shape the new government takes, this is a consideration it will have to take on board when it approaches the issue of water charges again after the agreed delay of nine months.
Posted by Jason Kelleher