For the first time since the 1830s, a British general election was held in Ireland without the participation of an exclusively Irish party. The election was fought between the Conservative Party and the Whigs, with the only third party being a Chartist candidate in Nottingham.

The Viscount Palmerston's government had fallen just months before the election, being replaced by the Earl of Derby's Conservative party. The Chancellor of the Exchequer Benjamin Disraeli sought to drum up support from Catholics in this election, although the franchise was still quite limited. This action did noticably improve the Tories' performance in Ireland compared to previous elections, with seats picked up in northern Munster and east Leinster. The Conservatives overtook the Whigs in Ireland, although Palmerston's party kept the top spot overall. Palmerston returned to Downing Street for his last term as Prime Minister.

While the election passed by quietly enough, politics in Ireland was slowly developing along a new line. The Repeal Association and the Irish Brigade had come and gone, and now the term "Fenianism" had been coined to describe those who wished to see Ireland gain complete self-governance. In 1858, both the Fenian Brotherhood and the Irish Republican Brotherhood had been established, campaigning for an independent democratic Irish republic. It would take some time yet before these groups would become major players to any degree, but the last half of the 19th century looked set to be an eventful one in Ireland. 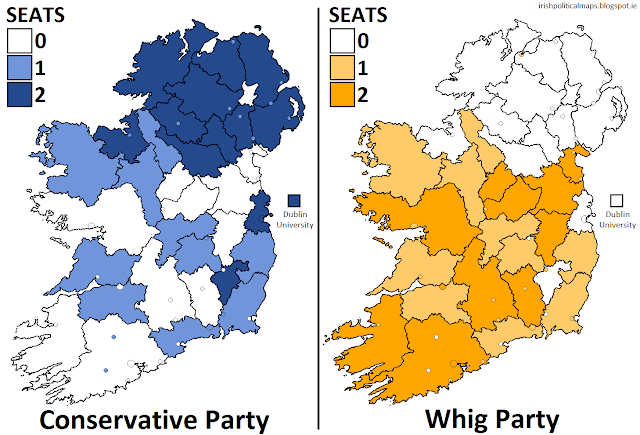