Abortion had never been legal in Ireland, and although Britain legalised it in 1967, there were no major calls for it to be made legal in Ireland. Indeed, by the early 1980s there were calls for a law to be introduced prohibiting the future introduction of abortion, as it was felt that the wording of Article 41 of the constitution, which considered the rights of the family "antecedent and superior to all positive law" could in theory be interpreted as allowing abortion if married couples so wished it. In the general election campaign of 1981, both Fianna Fáil leader Charles Haughey and Fine Gael leader Garret FitzGerald committed their parties to a referendum on the issue if they entered government. Fine Gael formed a coalition government with Labour after that election, which soon collapsed and was replaced after a new election by Fianna Fáil. Haughey's government drafted the wording of the proposed amendment, but before a referendum could be planned, that government too fell and a third general election restored the Fine Gael-Labour coalition.

While Garret FitzGerald did initially support the wording of the proposed amendment (see below) but shortly after the election the Attorney General, Peter Sutherland, advised the Taoiseach that the wording was ambiguous in ways which had not previously been considered, and which might prevent the safeguarding of the life of the mother where it was already safeguarded. The Labour Party refused to back the wording, and the Fine Gael party found itself in a conundrum, as any u-turns on the support of the amendment would be seized upon by Fianna Fáil in opposition as Fine Gael being "soft" on abortion. Regardless, Justice Minister Michael Noonan attempted to find an alternative wording.

The Fianna Fáil amendment was as follows:


"The State acknowledges the right to life of the unborn and, with due regard to the equal right to life of the mother, guarantees in its laws to respect, and, as far as practicable by its laws to defend and vindicate that right."
The alternative Fine Gael wording read:
"Nothing in the Constitution shall be invoked to invalidate or to deprive of force or effect a provision of a law on the grounds that it prohibits abortion."
The vote on the matter in the Dáil was scattered, as the government parties both split on the preferred choice of wording. In the end, the Fianna Fáil wording was supported by a majority of TDs and was so adopted.
The subsequent referendum campaign was one of the most divisive in Irish history to that point. Fianna Fáil, some of Fine Gael, the Catholic hierarchy and religious groups (particularly the Pro-Life Campaign) supported the amendment, while the Labour Party, Sinn Féin, the Workers' Party, the Anti-Amendment Campaign and in particular Senator Mary Robinson and the Taoiseach himself campaigned against it. 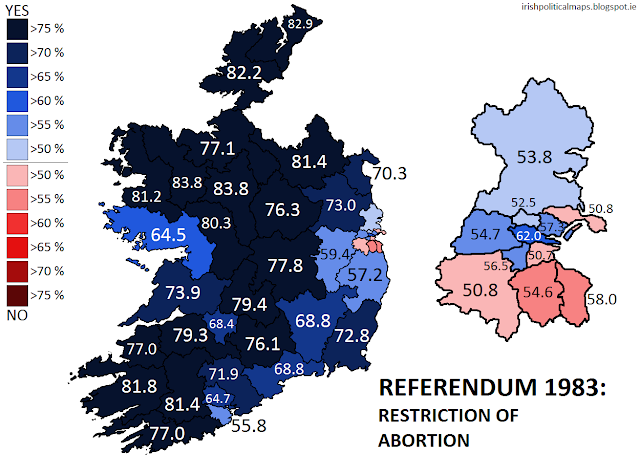 The amendment was defeated only in five Dublin constituencies, most strongly in Dr. FitzGerald's south-east Dublin. It was passed in every other constituency, although to varying degrees. It was widely supported by 70-80% of the electorate in most rural constituencies. The winning margin for the Yes campaign was smaller in urban areas, such as the other Dublin constituencies, Cork North and South Central, Limerick East, Waterford, Galway West and the constituencies surrounding Dublin. In all, 66% of the electorate supported the amendment, and it was inserted to Article 40 of the constitution.
The Amendment would cause problems in the 1990s with the arrival of the 'X' Case, in which a 14 year old girl was permitted by the Supreme Court to travel to Britain to have an abortion. As FitzGerald and Sutherland had feared in 1983, the wording was indeed vague enough that it could be interpreted to allow for abortion in such cases, or a refusal to provide treatment to women suffering from ectopic pregnancies. Further referendums would take place in the 1990s to clarify the meaning of the original "Pro Life Amendment", specifically regarding the right of women to travel and the availability of information on legal abortion in other states. This referendum was the first of several which would pit the old, conservative Ireland with the new, emerging liberal Ireland. The next referendum in 1986 proved to be another such battle.
Posted by Jason Kelleher