Referendum 1979: Adoption and University Representation in the Seanad

The referenda held throughout the 1970s are marked by a considerable lack of controversy. Even the referendum of the accession of Ireland to the EEC passed with a huge vote, despite the efforts of the opposing campaigners. The next two referenda later that year saw even less controversy, and they were both passed with 95% of voters in support. This record was topped five years later with the arrival of the referendum on adoption.

It was feared that adoptions granted by the Irish Adoption Board might be considered unconstitutional as they did not involve the judiciary. The Sixth Amendment to the Constitution (Amendment) Act sought to remedy this problem by ensuring the legality of the board's actions in the constitution. Introduced by the Fianna Fáil government, it was supported unanimously in the Dáil, and shortly afterwards was supported almost unanimously in the voting stations.

The measure was entirely uncontroversial, and enjoyed near total support across the state. The one remarkable feature of the referendum was the very low turnout experienced across the counties and boroughs, which ranged between 20 - 30% in most areas, and just 28% nationally.

The second issue to be decided by the voters concerned university representation in Seanad Éireann. As it stood, six university senators were elected by graduates after each general election. Constitutionally, three of these seats went to the National University of Ireland, with the other three going to Trinity College Dublin. The Seventh Amendment to the Constitution Act amended this to open the six seats up entirely to the NUI and TCD, as well as to any other institute of higher education - although that particular aspect has not yet been legislated for. The provision also allowed for the possible dissolution of the NUI despite the explicit reference to it in the constitution, and although such a dissolution was discussed in the 1970s it did not occur.

Like the Sixth Amendment, this measure was unanimously supported and widely endorsed by the electorate, although not quite to the same extent as its partner. 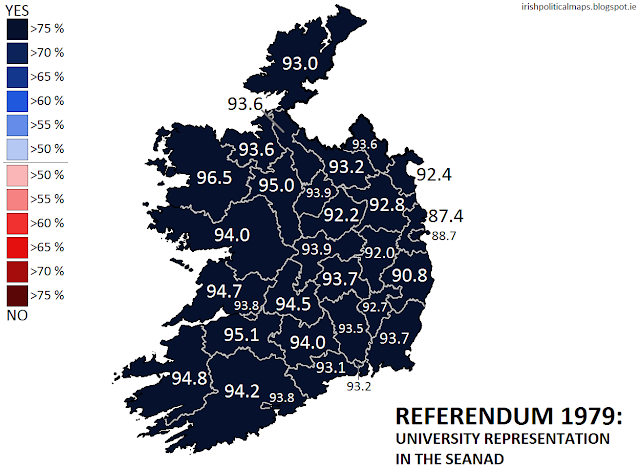 Curiously, despite the alteration, both the NUI and TCD continue to hold three seats each in the Seanad, even to this day.

These two issues were voted on by a minority of the electorate, such was the lack of controversy and urgency surrounding either of them. The 1970s had seen one referendum which involved an active campaign and four which were more formalities than anything else. As the decade drew to a close, a number of changes occurred on the Irish political landscape. Fine Gael had already said goodbye to Liam Cosgrave and was being revamped by its new leader Dr. Garret FitzGerald. Likewise, the Labour Party had seen the end of the Corish era and was now led by Frank Cluskey, while at the end of 1979 Jack Lynch would resign as Taoiseach and leader of Fianna Fáil, to be replaced in both capacities by Charles Haughey. The economic situation was beginning to worsen and it appeared that the 1980s would be a decade of difficulty and controversy. If nothing else, the next referendum to take place would make sure of that.
Posted by Jason Kelleher