The Irish electorate overwhelmingly approved the proposal for Ireland to join the EEC in a referendum in May 1972. Seven months later, their approval was sought for two new measures, both unrelated to the EEC and to each other, but both indicative of a gradual change taking place within Irish society.

The Fourth Amendment to the Constitution Bill proposed the lowering of the voting age from 21 to 18. Introduced by Jack Lynch's Fianna Fáil government, it was supported by all of the other parties, as well as much of the public, and so the referendum was in purpose more of a formality than an actual poll. 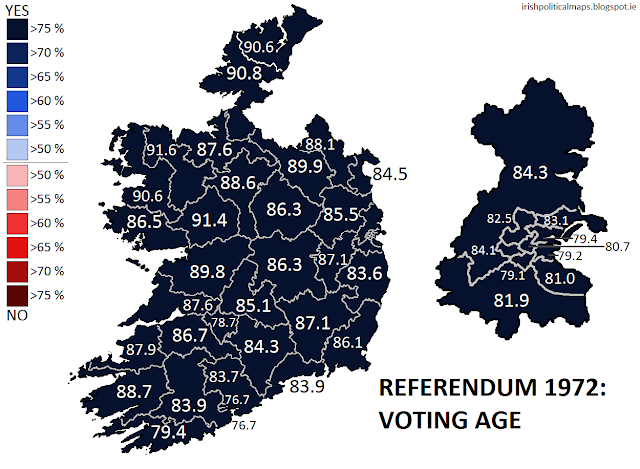 Support for the amendment did not fall below 75% in any constituency. The lowest support came from the two Cork City constituencies, which both returned a huge 76.7% in favour, while the highest Yes vote came from Mayo East with 91.6% in favour.

While the voting age was an issue which didn't generate much (if any) controversy, the other issue put to referendum with it did. Bunreacht na hÉireann, while never naming the Roman Catholic Church as the state religion, did make reference to the "special position" of that church within Ireland as the religion of the majority of the people. In taking this path, de Valera avoided the possibility of southern Protestants feeling discrimination from their own Constitution, and allowed recognition to the existence of other faiths in Ireland, such as the Protestants and particularly Ireland's Jewish population. The refusal to make Catholicism the state religion was condemned at the time by conservative Catholics, who in some cases objected to the mere mention of the Church of Ireland.

By 1972, the once inclusive measure taken by de Valera in 1937 had become outdated. The new ethos of the Catholic Church after Vatican II had adapted to the need for inter-religious co-operation, and it was argued that the "special position" of the Catholic Church was an obstacle to fostering co-operation between the two sides of Ireland. At any rate, Article 42.2 of the Constitution allows freedom of worship and prohibits discrimination based on religion, rendering the "special position" somewhat redundant. 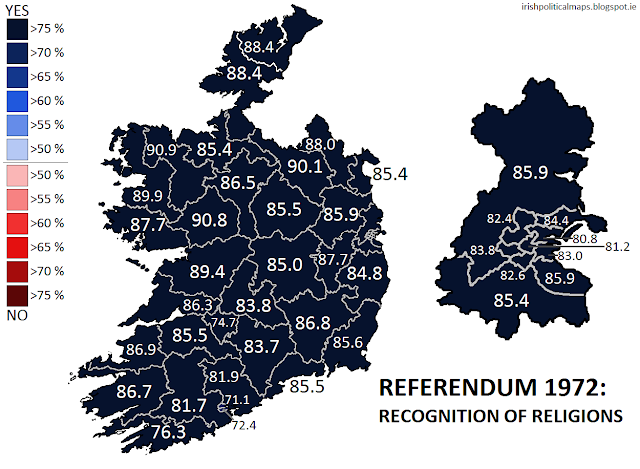 While the amendment did come under criticism from conservative Catholic views, it was just as easily passed as its partner. Again the lowest Yes votes came from Cork City, the only two constituencies to fall under 75%. The largest Yes victory for this amendment came from Galway North East, with 90.8% in favour.

After a very uncontroversial campaign on two separate issues, the two amendments were enacted and became part of Bunreacht na hÉireann. Irish citizens could now vote from the age of 18, and the Catholic Church lost the "special position" it had legally held for nearly three and a half decades, although in its more figurative form, that special relationship was not going anywhere quite yet. Nonetheless, the two issues for which voters went to the ballot box in December 1972, and the overwhelming majority in favour of change, belied the gradual transformation that was to take place in the Ireland of the 1970s and beyond. As if to illustrate how times were changing, the amendment removing the special position of the Catholic Church was enacted by the signature of the aging President de Valera, the man who had given it to the church in 1937, and who had always been so closely identified with it.
Posted by Jason Kelleher