Richard Greene had joined Fianna Fáil in the early 1980s after a period of time campaigning for the H-Block hunger strikers. He was expelled from that party in 1988 for opposing legislation which made it more difficult for suspected members of armed republican movements to avoid extradition for "political crimes". By 1991 he had joined the still-young Green Party, and won election as Green Party councillor in the Clonskeagh area of Dublin County Council. He was subsequently expelled from that party for his outspoken views on the X Case which contravened official Green Party policy.

In 1992, Greene ran for a seat in Dáil Éireann as an independent, endorsed by the Christian Centrist Party. He failed to win election, but tried again in 1997. This time, Greene had established his own party, Muintir na hÉireann, through which he was free to express his conservative views. Registered in 1995, this party would campaign in defence of the family and human life, but also of the environment, a simple callback to his Green Party days. In the 1996 divorce referendum, members of Muintir na hÉireann courted considerable controversy by suggesting that TDs Mervyn Taylor and Alan Shatter were unable to "understand" Christian marriage, as they were both Jewish. In that same year, the party organised a boycott of Virgin Megastore to protest their selling of pornographic magazines. 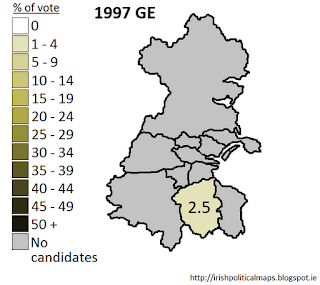 Greene ran as the only Muintir candidate in the 1997 election, although officially he still ran as an independent. As was the case the last time, he failed to secure a substantial amount of the vote, and failed to be elected. He was expelled Muintir na hÉireann shortly afterwards as his relationship with the party membership broke down. He subsequently supported the candidature of Dana Rosemary Scallon in the 1997 presidential election, and in the late 2000s became a spokesperson for the Catholic campaign group Cóir and the leader of the Christian Solidary Party after the 2011 general election.

Muintir na hÉireann did not contest any further elections, and although it has never officially disbanded it is now considered a defunct party.
Posted by Jason Kelleher