The decision of the Green Party to enter into coalition government with Fianna Fáil and the Progressive Democrats in 2007 received a mixed reception not only from the general public, but from members of the party itself. As the years progressed and the economic situation worsened, the relationship between the Green Party and their larger coalition partner soured, as did the mood of the Greens' membership. In the run-up to the 2009 European election, former Green MEP Patricia McKenna announced her intention to run as an independent, condemning her former party as "nothing but hypocrites". Green Party spokespeople retorted that McKenna merely did not share many views in common with the party. She failed to secure re-election to the European Parliament, but nonetheless McKenna did begin to attend meetings with other disillusioned Green Party members about the prospect of forming a new party.

This party manifested a year later. Calling itself Fís Nua (New Vision), it positioned itself as a left-wing party campaigning on social justice and political transparency. Its members hoped to draw support from disaffected Green supporters, as well as other left-wing voters. In the weeks preceding the 2011 general election, Fís Nua announced that it would run six candidates across five constituencies. The party suffered bad luck almost instantly when its planned candidate for Cork South West failed to be nominated by the 9 February deadline. The fortunes of the rest of the party's candidates would not be any better. 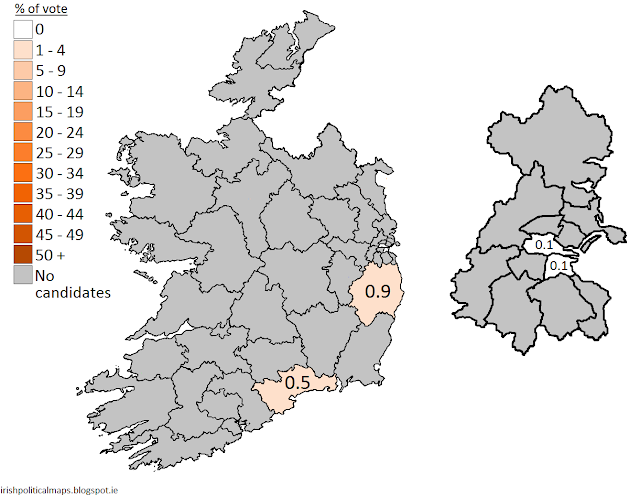 Liam Johnston in Dublin Central and Peadair Ó Céallaigh in Dublin South East each received just 0.1% of the vote. Ó Céallaigh in particular earned the dubious distinction of securing the lowest vote share of any candidate in the election, with just 18 votes to his name. In the only other two constituencies in which Fís Nua ran, their candidates fared only negligably better, with Ben Nutty securing 0.5% in Waterford, and Pat Kavanagh and Gerry Kinsella securing a combined 0.9% in Wicklow. Kinsella received the best personal share of any of the Fís candidates, with 324 votes (0.5%).

Despite what appeared to be a massive rejection from the electorate, Fís Nua went on to contest the Dublin West by-election later in the year. In this instance they fared no better, with Ó Céallagh again receiving just 0.1%, although his vote share did increase to 40 votes on this occasion. 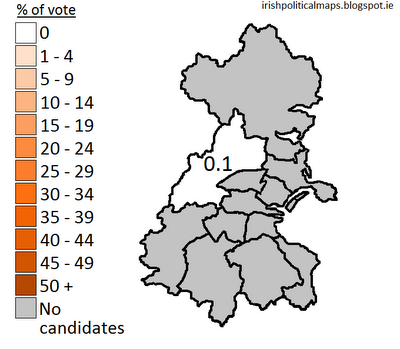 The future of Fís Nua is a particularly uncertain one. While left-wing parties are growing in the Ireland of the early 2010s, the new party is not benefitting at all. Its status as a Green Party breakaway group may tarnish it as long as the Green Party itself suffers from the unpopularity which led to its removal from the Oireachtas in 2011. What Fís Nua's fortunes so far seem to indicate, however, is that its future may not be so bright unless its members can find a way to make it more appealing to the electorate.
Posted by Jason Kelleher