Dr. Noel Browne first came to national prominence as Minister for Health in the Inter-Party government of 1948-51. Browne, who at that time was a Clann na Poblachta TD for Dublin South East, had proposed the infamous Mother and Child Scheme. This would have provided free health care to children and mothers, but it collapsed under opposition from the Catholic church and many of the state's doctors, and despite Browne's defiance of those same bodies. The controversy surrounding his actions ensured that he never returned to a prominent political position again.

Browne left Clann na Poblachta that year, and after three decades in the political wilderness, became seen as something of an eccentric within Irish politics. He spent time within Fianna Fáil (from which he was expelled), Labour (from which he resigned) and under the banner of his own creation, the National Progressive Democrats, from 1958 to 1963. By 1981, after several years as an independent he made another attempt to start a left-wing party in Irish politics. The Socialist Labour Party was intended to be a progressive, democratic socialist party in the face of what looked set to be a decade of economic hardship. In the 1981 general election, the SLP ran seven candidates, including Browne himself in Dublin North Central. 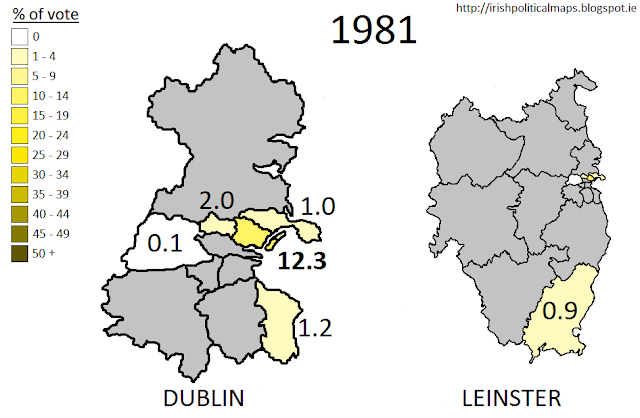 With 12.3% of the vote, Browne was easily re-elected (he had held his seat from the preceding Dublin Artane constituency), but he was the only one to succeed. The SLP was largely ignored by the electorate. The two candidates running in Dublin North West only secured 2% of the vote between them. Outside of Dublin, the only SLP candidate was John Teehan in Wexford, who likewise polled poorly.

The Socialist Labour Party collapsed in 1982, and Browne himself retired from politics at the February 1982 general election. In 1990 he was approached for the presidency by several left-wing members of the Labour Party, including the current President Michael D. Higgins. He refused the offer. He died in 1997 at the age of 81.
Posted by Jason Kelleher