The revisions undid many of the radical changes the Tullymander had introduced. The number of three-seat constituencies was drastically reduced, and constituencies were drawn more on county lines than they previously had been. Donegal reverted to two different constituencies, while Mayo and Galway remained as such, simply with new boundaries between east and west. The division between north and south Tipperary was restored to the traditional boundary. Cork underwent signifigant changes - the long lasting Cork City/Cork Borough constituency making way for Cork North Central and Cork South Central, which served not only the city but the surrounding towns of Douglas, Blackrock, Ballincollig and Glanmire.

The Dingle peninsula went entirely to Kerry South, while the Tullow section of Carlow returned to Carlow-Kilkenny. Both of these changes would be reversed slightly in a minor revision to the boundaries in 1983, wherein Tullow returned to Wicklow and the Knockglass region of Kerry returned to Kerry North.

The most radical changes came once again to Dublin. Its county boundaries were restored, but within them came a departure from the previous tradition of distinguishing between city/borough and county areas, as in Cork. Dublin would now be divided between a Central area, and North, South and West areas, with North and South receiving their own east, central and west areas. The only old Dublin constituency to remain was a slightly enlarged Dún Laoghaire.

Only Laois-Offaly, Ireland's oldest continuing constituency, remained untouched. It would stay this way until the 2012 Constituency Commission report.

The changes made to these constituencies since 1992 have been largely minor, compared to the complete redrawings which had taken place prior to this reivision. Until 2012, the constituencies in Dublin retained the same pattern, and many constituencies in other counties still do. The days of governments altering boundaries had finished. From now on, boundaries would only be changed if demographically necessary, not if politically desirable.


The 1981-92 boundaries superimposed in red over the previous boundaries. 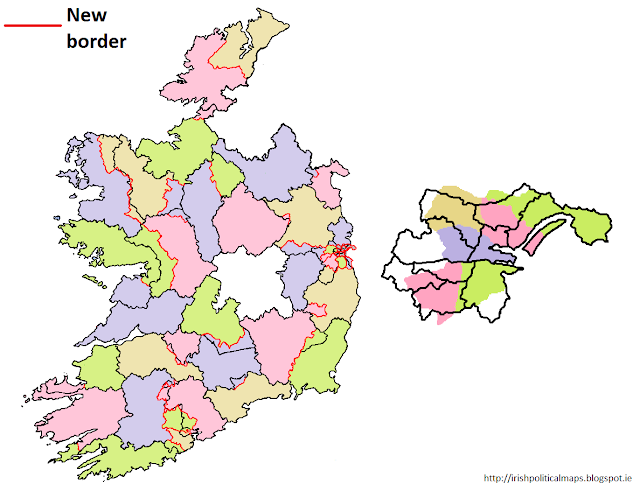 1990 Boundary Revision
In 1990, a new Electoral Amendment Act provided further alterations, albeit on a much smaller scale than ever before seen. The only boundary changes to be made were the replacement of the Roscommon (3 seats) and Longford-Westmeath (4 seats) constituencies by Longford-Roscommon (4) and Westmeath (3) respectively.
This revision was in place for the 1992 general election, and was abolished by the next Electoral Amendment Act in 1995. 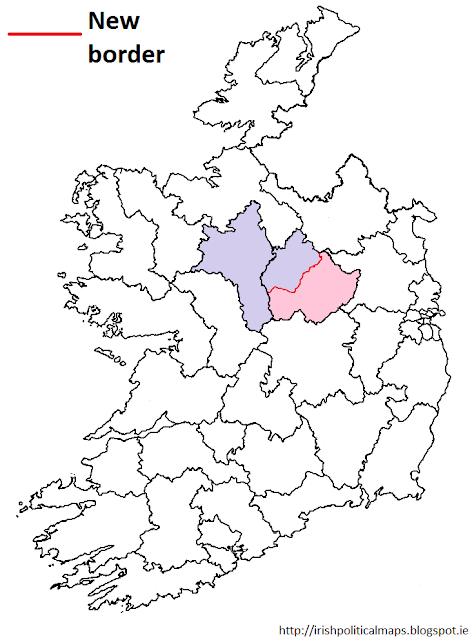