The 1980s saw a substantial increase in the presence of left-wing parties in Ireland. Although many of these parties were very minor and failed to make a lasting impact on the political scene, this cannot be said of the Democratic Socialist Party, which was founded in 1972 by a merger of the Limerick Socialist Organisation and the Irish Socialist Party (unrelated to the current Socialist Party). The DSP was headed by the leader of the Limerick organisation, Jim Kemmy, who considered himself to the left of Labour. That party had for four years in the 1970s been in a coalition government headed by the conservative Fine Gael leader Liam Cosgrave. Kemmy first ran as a DSP candidate in the election which brought that government down in 1977.

Although his bid in 1977 was unsuccessful, Kemmy won a seat in the next general election four years later. The government formed after this election was another Fine Gael-Labour coalition, this time headed by the more liberal Dr. Garret FitzGerald. The coalition relied on a number of small-party and independent TDs for support, including Kemmy. When Finance Minister John Bruton attempted to bring in VAT on children's shoes in the 1982 Budget, Kemmy and Workers' Party TD Joe Sherlock withdrew their support, forcing a new general election, which in turn resulted in another election seven months later. Kemmy lost his seat in this election, though the DSP was for the first time running candidates outside of Limerick. Garry O'Sullivan ran for a seat in Cork South Central in November 1982, but polled last with only 369 votes.

Although 1982 saw the DSP losing its only seat, it was also the year the party first contested elections in Dublin. Candidates were put forward in constituencies which have since become areas of support for left-wing parties such as the Socialist Party and the People Before Profit Alliance. In the 1980s, however, this support was not so strong yet. The DSP never won any seats in the Dublin area. 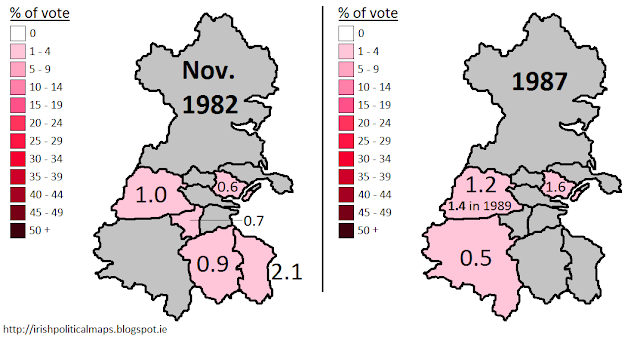 The second Fine Gael-Labour coalition which had resulted from the November 1982 election was defeated in 1987 by Fianna Fáil. In this election, Kemmy regained his seat in Limerick East, which he held in 1989. By then however, the DSP had reduced its ambitions, running only Kemmy and a single candidate in Dublin West. In 1990, Kemmy merged his party with Labour, the party with which he began his career. He retained his seat until his death in 1997. In the resulting by-election, his former DSP colleague Jan O'Sullivan succeeded him.