With a turnout that struggled to reach 50% in many constituencies, this referendum lacked much of the drama and passion which characterised the Lisbon referenda. Instead of that drama, the campaigns on both sides of the European Fiscal Compact debate ran amidst a large degree of confusion from the electorate.

The Fiscal Compact, agreed by all but two of the EU member states on 2 March 2012, requires that its signatories have national budgets that were either balanced or in surplus by 2014, on the threat of a fine of 0.1% of a country's GDP if it fails to do so. In Ireland, this move was seen by some as further interference by the EU in the economic affairs of its members, specifically Ireland. The notion that Germany now dictated the economic policy of Europe had taken root within the mindset of the Irish electorate. Campaigners on the Yes side, which included the Government parties and Fianna Fáil, took a similar line to their Lisbon campaigns, arguing that an affirmative vote on this issue would secure Ireland's economy and result in further jobs and investment to the country. Conversely, the No side - led primarily by a surging Sinn Féin - dismissed the Compact as having no benefits for Ireland. The attitudes of both sides to the Compact can best be summed up by how they referred to it: the Yes side urged people to vote for the Stability Treaty, while the No side urged people to vote against the Austerity Treaty.

Despite the ongoing confusion and antipathy towards the European project, opinion polls indicated that a majority of the decided electorate would vote Yes, indications which were borne out in reality after the referendum was held on 31 May 2012. National voter turnout just passed 50% (50.5%), with the lowest turnouts in Donegal, where both constituencies returned a No vote, and Cork East, which voted an overwhelming Yes. Aside from Donegal, only three constituencies in Dublin gave the No campaign a victory, though the margin of victory in most constituencies was 10% or less. The largest percentages of Yes votes came from Munster, Mayo and south east Co. Dublin, with Dublin South and Dún Laoghaire showing 75.8% and 74.2% in favour of the Compact respectively.


The impact of Sinn Féin on the campaign was quite profound. Although their campaign was not victorious, all of the constituencies in which the No vote prevailed, as well as the four areas where the Yes vote's margin of victory was under 5% are represented by Sinn Féin in Dáil Éireann. Analysts have opined that the strong performance of Sinn Féin in this referendum has solidified the public perception of the party as the "real" Opposition instead of a still-weak Fianna Fáil. The truth of this thinking will be borne out in future visits to the ballot box.
A note on Dublin Mid-West: Although in percentage terms, the ratio of Yes and No votes in this constituency was 50:50, five more voters voted Yes than the number who voted No (16,590:16,585), counting it as a Yes victory. 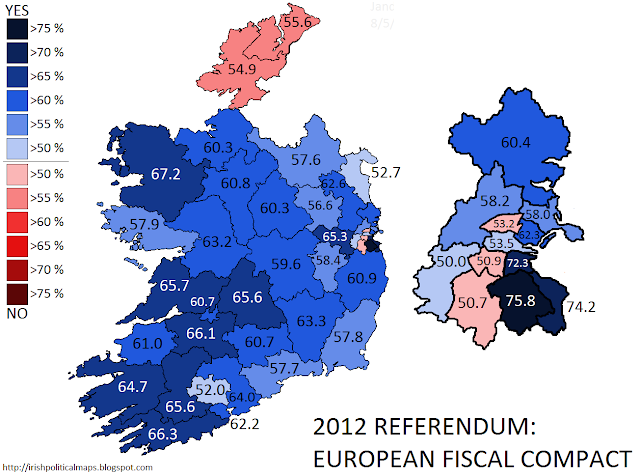