In 1948, Taoiseach John A. Costello announced during a visit to Canada that the Irish Free State would formally become a republic in the next year. This declaration came as somewhat of a surprise not just to the British government but to members of Costello's own Cabinet, which had not been consulted prior to what was later revealed to be a spontaneous decision. Nonetheless, in 1949 the Republic of Ireland Act came into effect without difficulty, and the British reciprocated with the Ireland Act, which recognised the new republic and reiterated Northern Ireland's position within the United Kingdom. The political atmosphere surrounding the development was so amiable that King George VI sent a message of goodwill to the new republic on its departure from the Commonwealth.

In Northern Ireland itself, the ruling Unionist Party saw an opportunity to consolidate their power. Playing on unionist fears about the developments in the Free State, the government called a new general election. It was obvious by now that this election would be safely won by the UUP, but it was their hope that they would make further gains at the expense of the Northern Ireland Labour Party. 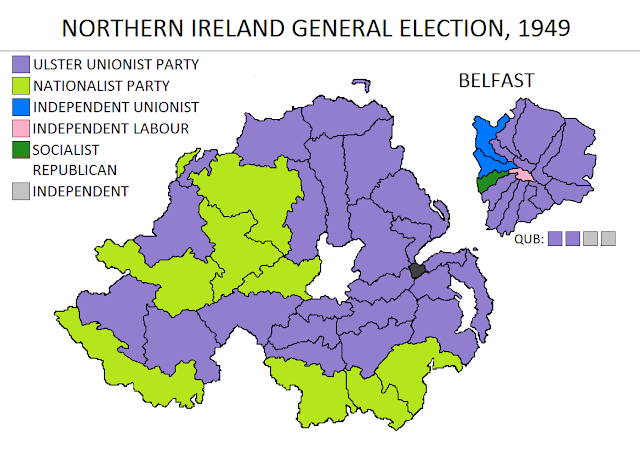 The election saw absolutely no change outside of Belfast, where the UUP's wish came true and they gained four seats at the expense of NI Labour and the Commonwealth Labour Party, removing them both from Stormont. Independent Labour also lost their seat in Pottinger, but picked one up in Belfast Central at the Nationalist Party's loss. The Republican Socialists and independent Unionists held their seats. The UUP had been successful. They had enhanced their already unassailable position in Northern Irish politics. It would be another twenty years before this would change.
Posted by Jason Kelleher