Dáil elections, 1982 - 1987
The 1980s saw the Irish republican movement reach a level of prominance in Irish and British politics that had not been seen since the 1920s. The Troubles in Northern Ireland and the hunger strikes in the Maze Prison in 1981 catapulted various republican groups into parliamentary politics. The most prominent of these groups was Sinn Féin, which had not taken part in a Dáil Éireann election since 1957.

Sinn Féin's first electoral foray in the 1980s came in the February 1982 general election caused by the failure of the governing Fine Gael-Labour Party's Budget. In this election, just four candidates ran, including former IRA Chief of Staff John Joe McGirl. Three of these candidates ran in border constituencies, where they received between 6 and 9% of the vote. One candidate, Christy Burke, ran in Dublin Central but secured a much lower 3.2%. Sinn Féin would not contest the next election nine months later, and events afterward would mean that their next electoral outing in the republic would have a much bigger impact than this one.

In 1986, the majority of the Sinn Féin party voted to abolish the party's policy of abstentionism in Dáil Éireann. From this point on, elected Sinn Féin TDs would take their seats and fully partake in the politicial affairs of the state. In the next general election a year later, Sinn Féin ran 23 candidates in constituencies across the state. Though the party secured just 1.9% of the national vote, they performed well enough in several constituencies, particularly in Donegal North East and other boreder constituencies, beginning an ongoing trend. It would take another decade for Sinn Féin to successfully contest a general election. 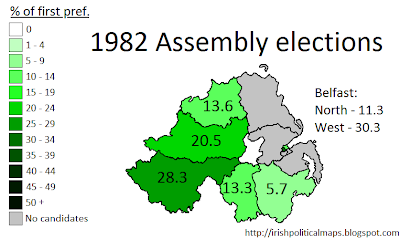 In 1982, an election was held in Northern Ireland for a new Assembly to which power would be devolved. Though the election would pass successfully, the Assembly itself would not. It was abolished just four years later, with the parties involved left to find a new way to secure devolution in Northern Ireland. In the 1982 election, Sinn Féin ran candidates in strongly nationalist areas in the west and south, as well as West Belfast, where the party won a high of 30.3%. 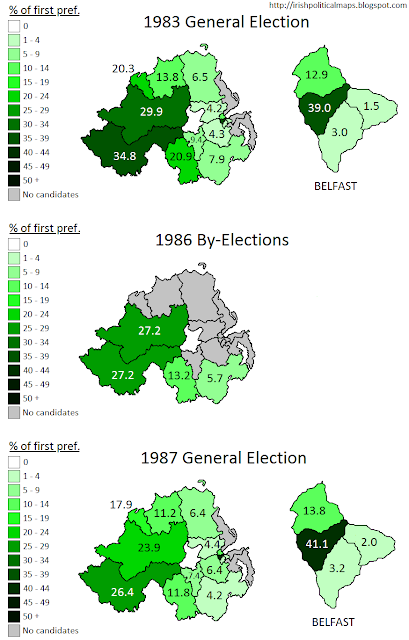 Having contested these elections, Sinn Féin next ran candidates for Westminster in the 1983 United Kingdom general election. Candidates were put forward in all but three constituencies - the heavily unionist ares of East Antrim, North Down and Strangford. Although Sinn Féin polled very well once again in heavily nationalist areas, their performance was lacking, with even Fermanagh & South Tyrone, the constituency Bobby Sands represented, going to the Ulster Unionist Party. Sinn Féin's sole success in this election was in Belfast West, where future party leader Gerry Adams won the seat. He would be re-elected at every election until 1992, and then again from 1997 to 2010.

In 1986, fifteen by-elections were held in Northern Ireland upon the resignation of unionist MPs in protest of the 1985 Anglo-Irish Agreement. Sinn Féin contested four of these by-elections in the west and south: Fermanagh & South Tyrone, Mid-Ulster, Armagh and South Down. No electoral gains were made, and the party's vote share in each constituency declined by a few per cent. The next general election a year later saw an even greater decline in every constituency bar Lagan Valley, Upper Bann, Belfast North and Belfast West, where Adams' vote increased to 41.1%. The party's fortunes would eventually increase in 1997, when Mid-Ulster's Martin McGuinness became an MP alongside a newly re-elected Gerry Adams. Unlike in Ireland, however, the Sinn Féin policy of abstentionism in Westminster has not been abolished. Regardless of how many MPs Sinn Féin would have, they would not take their seats.
Posted by Jason Kelleher