In 1974 a new group which was both socialist and republican was established by a mixture of independents, trade unionists and former members of the Official IRA. The Irish Republican Socialist Party saw itself as the successor to the ideas of James Connolly. Simultaneously, the new party members founded their own paramilitary organisation, the Irish National Liberation Army. Almost from the very beginning it found itself at odds with its larger counterparts, Sinn Féin and the IRA. Its founding member Seamus Costello was eventually killed later in the year in what many within the party believed was an IRA attack. Throughout the 1980s and 90s the group opposed talks between the Irish and British government, denouncing the 1985 Anglo-Irish Agreement and the 1998 Good Friday Agreement as cementing British rule in Ireland. Like Sinn Féin however, it has also began to move away from paramilitary activities, with the INLA officially standing down in 2009. 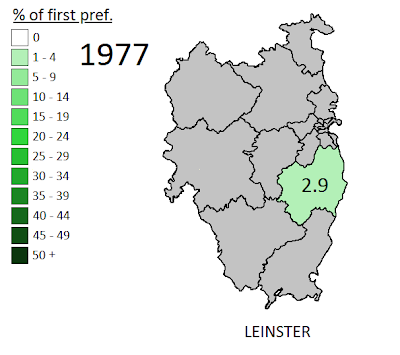 1977 General Election
Only one IRSP candidate ran in the 1977 general election: Costello himself in Wicklow. He had served in Wicklow County Council for ten years. He polled last, receiving just 2.9% of the vote.


1982 General Elections
No candidate replaced Costello in Wicklow after his death. The IRSP's forays into national politics in the elections of February and November 1982 would see them confined to Munster, again returning poor showings. The IRSP would have greater success contesting local elections in both the republic and Northern Ireland.