Outgoing Taoiseach Liam Cosgrave resigned as leader of Fine Gael upon the party's loss in the 1977 general election. He was replaced by his Minister for Foreign Affairs, Dublin South East TD Garret FitzGerald. Unlike his more conservative predecessor, the more liberal-minded FitzGerald was keen to reform and revitalise the party and turn it into a more credible alternative to Fianna Fáil. He had previously been involved with the Just Society document of the 1960s, which set out a new liberal tone for Fine Gael, as well as aborted discussions near the end of that decade to merge the party with Labour. As leader he established Young Fine Gael and began touring every constituency. Fine Gael's popularity began to rise with the new leader, although he enjoyed only two years of such novelty before his Fianna Fáil counterpart Jack Lynch was replaced by the charismatic Charles J. Haughey.

Haughey called a general election for June 1981, initially hoping to consolidate Fianna Fáil's position. Damage to the government party caused by delays and the ongoing effects of the hunger strike in Northern Ireland meant that the Opposition could hope to make gains. Both Fine Gael and Fianna Fáil made many populist promises, though Fianna Fáil's economic policies in the past four years had seen an unsustainable increase in spending. 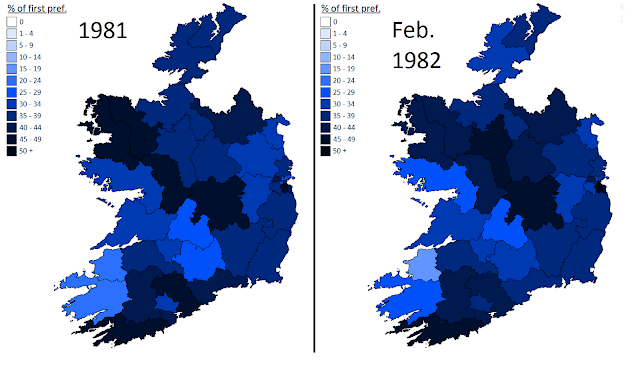 The election proved to be a huge success for Fine Gael, with a net increase of 20 seats on their 1977 total. Fianna Fáil meanwhile lost 6 seats, mostly to republican candidates. Fine Gael's strongest areas of support at this time were FitzGerald's southern Dublin, areas of West and East Cork, Connacht and Laois-Offaly. The party's vote share had hit a record high of 36.2%. FitzGerald became Taoiseach with the Labour Party once again supporting Fine Gael in power. This government's lifetime would be very short however, with FitzGerald requesting and being granted a dissolution of the Dáil just over 6 months later due to a loss of supply. The resulting general election in February of 1982 saw Fine Gael lose just 2 seats, but also governance, as Fianna Fáil returned to power with the aid of independents and Workers' Party TDs. 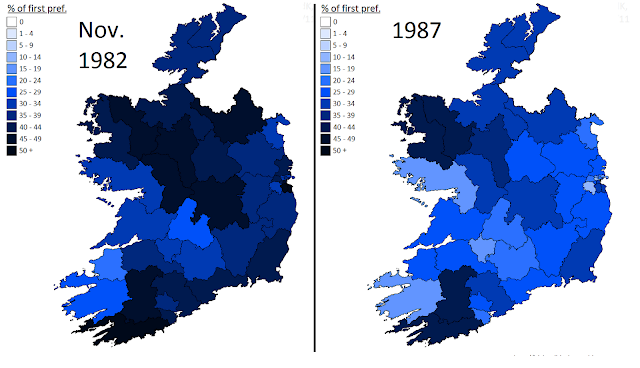 Haughey's new government would last an even shorter amount of time: the support of the left-wing TDs was withdrawn over the issue of budget cuts in October. A still popular FitzGerald and Fine Gael ran on a campaign to repair the damaged economy, with the new party organisation ensuring the campaign would be an effective one. Fine Gael returned an astonishing 70 seats, only 5 behind Fianna Fáil's total. This would be Fine Gael's best electoral performance until 2011. They returned to government with the Labour Party once more. This government would last a further five years, until another disagreement over budget proposals resulted in Labour withdrawing from government. By this time, tough economic policies had lessened Fine Gael's support considerably, and the party fell to 50 seats, its vote decreasing by 12%. Only West Cork and Mayo returned particularly strong Fine Gael showings - in other areas, much of the party's vote was taken by the new Progressive Democrats.

Like Cosgrave did ten years previously, FitzGerald stepped down as leader of Fine Gael and was replaced by Alan Dukes. With their most successful decade at an end, Fine Gael once again faced an uncertain future.