In 1981, 23 republican prisoners in the Maze Prison in Co. Down began a hunger strike in protest of the British government's refusal to recognise their "Special Category Status" as paramilitary prisoners. Though there had been hunger strikes by republican prisoners before, this event earned global attention with the election of one of the hunger strikers, Bobby Sands, as MP for Fermanagh & South Tyrone in a by-election. His death soon after sparked outcry and helped to galvanise the broader Irish republican movement.

In the general election in the Republic of Ireland that year, twelve republican figures campaigned as "Anti H-Block" candidates. Of these twelve, six were members of Sinn Féin/PIRA, three of the Irish Republican Socialist Party/INLA, and the remaining three were independents. Public shock at the plight of the hunger strikers resulted in Fianna Fáil, the traditional republican party, losing support to Anti H-Block candidates, a loss also attributable to Taoiseach Charles Haughey's perceived inaction on the issue. 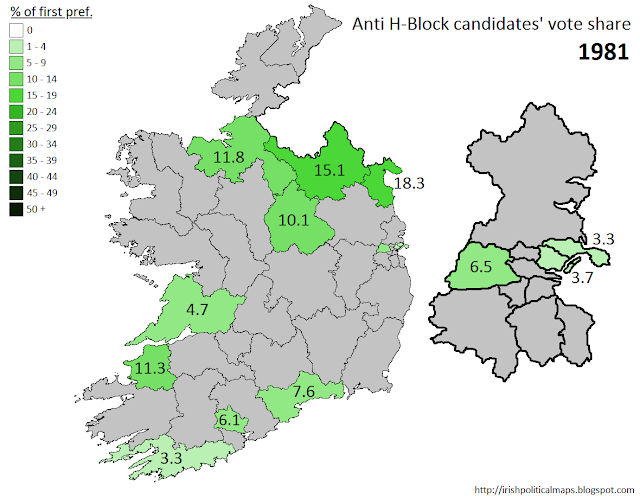 The Anti H-Block candidates won a seat in both Cavan-Monaghan and Louth, where they received their best share of the vote at between 15 and 18%. Shares of 10-11% were won in Kerry North, Sligo-Leitrim and Longford-Westmeath, while the remaining 7 candidates received less than 10%. Both of the new Anti H-Block TDs, Kieran Doherty (Cavan-Monaghan) and Paddy Agnew (Louth) were in prison, with Doherty on hunger strike. He died in August 1981, while Agnew was released from prison in 1986.

The success of the Anti H-Block candidates was notable for the fact that they achieved remarkably high vote shares despite neither being a professional political organisation nor able to legally appear or discuss their views on television. While the Anti H-Block movement would cease with the ending of the hunger strikes in October 1981, the effect of the strike and the movement would be to inspire republican groups, particularly Sinn Féin, to take a more active approach to parliamentary politics in both parts of Ireland, ultimately resulting in the abolition of abstentionism by Sinn Féin in 1986.
Posted by Jason Kelleher