The confidence displayed by Fianna Fáil, even in Opposition, was unmatched. Twice in the past 14 years, Fianna Fáil had attempted to introduce the First Past the Post electoral system to Irish politics, though both attempts were rejected by the electorate. Fine Gael and Labour, shaken by their perennial Opposition status, would have been all but annihilated by such a system. In the late 1960s the two parties considered an official merger in order to form a stronger alternative to Fianna Fáil, though this idea did not come to fruition.

When the two parties found themselves in government, therefore, they were anxiously aware of the possibility of being replaced by Fianna Fáil in the next election. In an effort to avoid this, the government pursued a by now well-worn course of action: amending the electoral constituency boundaries.

This revision was headed by the Minister for Local Government James Tully (Labour - Meath). To this point it had been common practise for the government of the day to tweak the boundaries to enhance its own success at the next election, but Tully's revisions were done with this explicitly in mind. In what became known as the "Tullymander", the constituencies were re-arranged in such a way as to maximise the number of three-seat constituencies, particularly in Dublin. It was hoped that one each of these seats would go to the three main parties in the next election, which would result in Fianna Fáil being outnumbered by the coalition in each constituency, ensuring the latter's re-election.

Many of the revisions saw drastic changes in constituencies across the country: 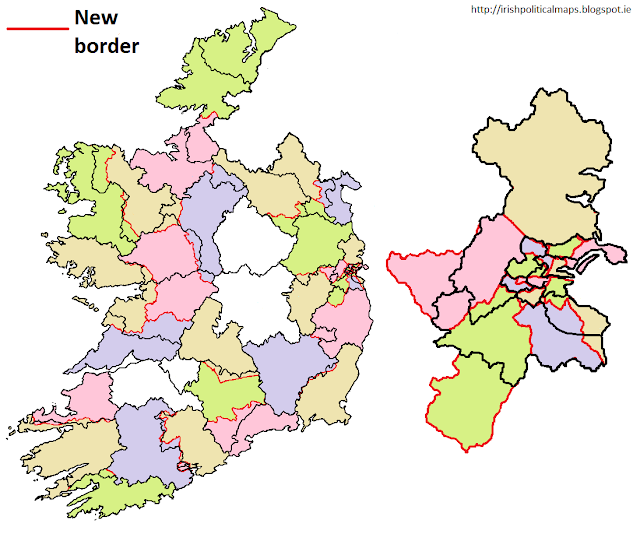 The next general election, the first at which these boundaries came in to effect, was in 1977. It was a disaster for the coalition, which lost 16 seats between them against Fianna Fáil's gained 19. The "Tullymander" had backfired horribly on the government. Besides Fianna Fáil's record best election result, the legacy of the "Tullymander" was the creation of an independent boundary commission (now the Constituency Commission) which has overseen every subsequent revision of the constituency boundaries. The days of governments adjusting the borders and seats for their own gain had ended quite memorably.