The Irish presidency is a position which has often had its viability and relevance called into question. Particularly in the late 1970s there were calls for the office to be abolished. While these calls have never disappeared completely, the presidencies of Patrick Hillery, Mary Robinson and Mary McAleese have each proved popular and have done much to restore a sense of dignity to the office. Much was said of the gravitas brought to the role by President McAleese in the last years of her term, particularly with the visit of Britain's Queen Elizabeth II to the state.

The respect awarded to McAleese meant that the race to succeed her would be followed very closely. The new government parties were eager to nominate popular figures for the presidency - particularly Fine Gael, which had never won a presidential election before and hoped to do so this time on the back of their phenomenal general election results eight months before. Labour hoped to repeat their 1990 victory. Both parties ran internal nomination contests, which saw many prominent figures - some expected, some not - announce their interest. For Labour, three candidates came forward: former Senator Kathleen O'Meara, former TD Michael D. Higgins, Special Olympics activist Mary Davis and Barnardos Chief Executive Fergus Finlay. The Labour Party selection convention in June saw Michael D. Higgins become the first official nominee in the 2011 race.

The Opposition, meanwhile, was more uncertain of their intentions. Fianna Fáil took a number of months to decide on its plans for the election. While the desire of Munster MEP Brian Crowley to seek the party's nomination had been known for some time, party leader Micheál Martin instead investigated the possibility of recruiting veteran broadcaster Gay Byrne and sports commentator Micheál Ó Muircheartaigh. Both men considered the possibility, but ultimately turned it down. Fianna Fáil, the party which had won all but one of the six presidential elections to date, eventually decided not to run a candidate in this election, further solidifying the perception espoused by many commentators that it is a party in decline.

Sinn Féin made the surprise announcement in September that they, with the help of Independent Oireachtas members, would nominate Northern Ireland deputy First Minister Martin McGuinness as their candidate. Mr. McGuinness' entry to the race shook it up considerably, as questions were asked about his potential performance on election day, and his ability to gain the support of republican-minded voters who would have voted for Fianna Fáil.

The election was not by any means confined to party candidates. Having failed to win the Labour nomination, Mary Davis sought the support of local councils. Under constitutional law, a prospective candidate needs the backing of four of these councils to become an official presidential candidate. Mary Davis managed to receive the support of 13 councils. Businessman Seán Gallagher announced his intention to run in June, and after briefly seeking the support of Fianna Fáil Oireachtas members, followed Mary Davis down the local council route. He quickly gained the support of the necessary four, and was poised to gain more before  requesting that other councils facilitate other prospective candidates.

Independent Trinity College Senator David Norris had made it known in 2010 that he wished to run for the presidency. His campaign got off to a good start, and he topped several opinion polls until the summer, when controversy arose over the revelation that he had written letters seeking clemency for his former lover in a statutory rape case in Israel. Under pressure, Norris withdrew from the race in August, only to re-enter a month later. His return to the race saw the previous controversy largely die out, but Mr. Norris appeared unable to gain back the wide support he had enjoyed beforehand. In a dramatic week at the end of September, Mr. Norris came two members short of winning sufficient Oireachtas backing, and sought local council support at the eleventh hour. He won the backing of three, but looked set to fall short before Michael D. Higgins requested that the Labour-dominated Dublin City Council facilitate Norris' nomination. Simultaneous to these developments, former presidential candidate Dana Rosemary Scallon announced that she was entering the race. She won the backing of five councils just before Norris did, producing an unprecedented seven candidate race, beating by two the record set 14 years previously. 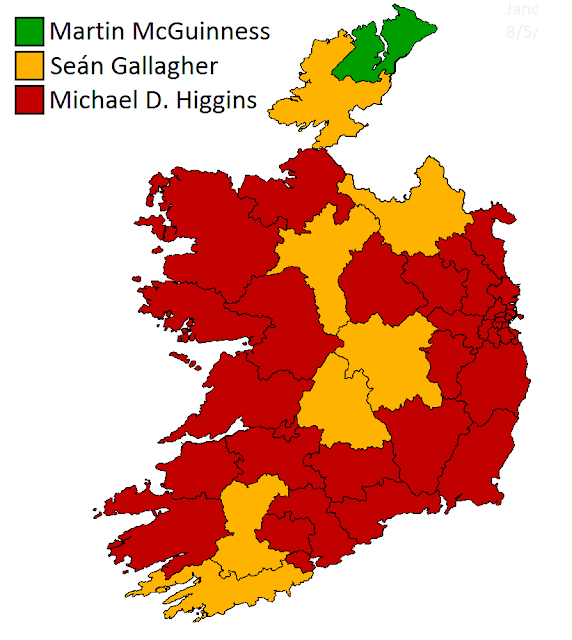 In the latter weeks of the campaign, support noticably solidified around Michael D. Higgins and Seán Gallagher. By the weekend before the election, opinion polls showing Mr. Gallagher with a commanding lead of 15 points ahead of Mr. Higgins. Despite ongoing questions about the extent Mr. Gallagher's role in Fianna Fáil before his resignation, he appeared unassaible until the final presidential debate on RTÉ's Frontline on Monday 24th October. During the debate, Martin McGuinness accused Mr. Gallagher of receiving money from a particular individual for Fianna Fáil in exchange for a photograph of a private Fianna Fáíl fundraising event, despite the latter's previous assertions that he never took money for the party. Mr. Gallagher's handling of the accusations led him in to trouble. Two particular lines: "I have no recollection of giving money to that guy" and "I may well have delivered the photograph, if he gave me an envelope..." caused uproar, controversy and a frenzy of activity across social networking sites. It was generally Mr. Gallagher's handling of the accusations left much to be desired, and considerable doubt emerged about the credibility of his claims that he was never a prominent member of Fianna Fáil.
As a result, election day arrived with a great degree of fascination regarding the extent to which the debate harmed Mr. Gallagher's chances of victory, and whether Michael D. Higgins could overtake him. As the results were counted on Friday 28th October, it became clear after a mere two hours that Michael D. Higgins had indeed overtaken Seán Gallagher in terms of support. As the day progressed, it became clear that Higgins was to top the poll in most constituencies. Mr. Gallagher's support had ebbed considerably, though he still topped the poll in seven constituencies including his base, Cavan-Monaghan. Martin McGuinness topped the poll in Donegal North East, and nationally secured a strong showing in third place.
Mary Davis and Dana Rosemary Scallon, who had both floundered in opinion polls leading up to the election, fared very poorly, with average showings of 1-3% and 2-4% respectively. As was expected thanks to the same opinion polls, Gay Mitchell performed very poorly, giving Fine Gael their worst presidential election result in history. David Norris secured an average 10% of the vote nationwide, though at the time of writing it is unknown whether he will finish fourth or fifth in relation to Mr. Mitchell.
The candidate's first preference votes are mapped in the links below. Due to the size of the maps, they are posted seperately in order to prevent this post becoming too unnavigable or slow to load. Each map features more information on that candidate's performance.
Posted by Jason Kelleher