Éamon de Valera's election to the presidency in 1959 saw the lynchpin of Irish politics take on a different role in the affairs of the country. Although largely a ceremonial role, with nothing near the power de Valera enjoyed as Taoiseach, he did not merely fade in to the background as many expected of him. In 1961 he appeared on RTÉ Television's (now RTÉ One) inaugural broadcast, wherein he warned about the potentially dangerous influence of television upon Irish life. Two years later, he received US President John F. Kennedy during the latter's famous visit to Ireland. When Kennedy was assassinated later that year, de Valera (then 83) personally attended the funeral, accompanied by Irish military cadets at Jacqueline Kennedy's request.

By the end of his first term, de Valera was ready to retire completely from public life, but under pressure from Fianna Fáil, he eventually agreed to seek a second term. It was initially anticipated that he would face no challengers until Fine Gael responded by nominating former Health Minister Tom O'Higgins (TD for Laois-Offaly). Few initially believed O'Higgins could mount a serious threat to the political heavyweight - however, much like the decade itself, this election represented a shift away from the "old guard" of Irish politics and towards new, young, dynamic individuals and policies. The Fine Gael party was being modernised by the likes of Garret FitzGerald, Declan Costello and O'Higgins himself, allowing them to present a much more lively campaign than Fianna Fáil could manage for its octogenarian, well-established candidate.

The result came very close, with de Valera losing out by small margins only in Dublin, areas of Cork, Mayo, Wicklow and O'Higgins' home constituency of Laois-Offaly. O'Higgins came within a remarkable 1% of beating the incumbent president. 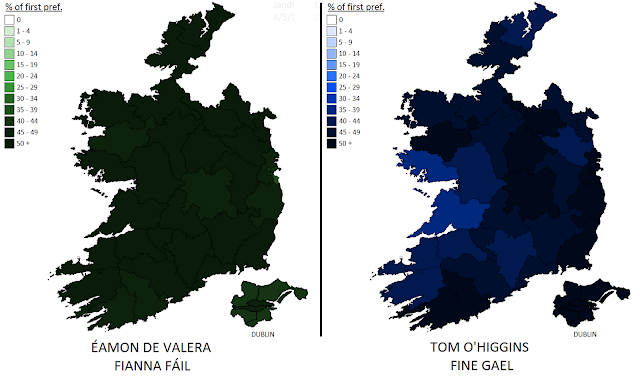 Predictably, de Valera's strongest gains were in his native Clare, but his results elsewhere (and nationally) were a source of disappointment and embarrassment to the veteran politician. His national majority over his opponant was a mere 10,717 votes. He blamed this on the poor campaign mounted by his campaign manager, Agriculture Minister Charles Haughey.

Regardless of his setback, in this election de Valera set a world record, which still stands, for oldest elected head of state. At the time of his retirement seven years later, he was the oldest head of state in the world.