The office of President was established by Bunreacht na hÉireann in 1937. A year later, Douglas Hyde was elected unopposed as the first Irish President. While the constitution allowed for a president to serve two terms in office, Hyde opted not to run for re-election, and in 1945 Ireland found itself with its first presidential election.

Fianna Fáil nominated deputy leader and Tánaiste Seán T. O'Kelly. Unlike Hyde seven years previously, O'Kelly was not to enjoy an unopposed candidacy. Former Sinn Féin TD Patrick McCartan, who had left politics for the past twenty years, sought nominations from local councils to run as an independent republican candidate. The constitution provided that presidential nominations could be secured only by the backing of 20 members of the Oireachtas or four local councils. McCartan failed to receive the backing he needed, but ended up with the support of the requisite number of Oireachtas members, many of them from the Labour Party. Fine Gael meanwhile nominated War of Independence veteran Seán Mac Eoin. The electorate were faced with a three-way race for the Áras, something they would not see again for another 45 years.

The campaign was a colourful one, with Fianna Fáil attacking Mac Eoin's Blueshirt past, McCartan accusing O'Kelly of hiding in Paris during the independence years, while also denying that he sold Irish sweep tickets in the US in the 1920s. O'Kelly played on his popularity and resisted a by now common charge from the Opposition that Fianna Fáil, in power for 13 years already, wanted to create a dictatorship. In a gesture that would be repeated by another republican presidential candiate decades later, McCartan vowed that if elected, he would take a reduced salary. 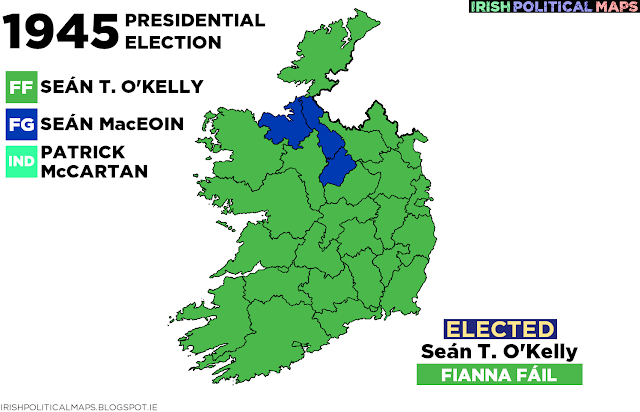 After the votes were cast on 14 June, O'Kelly emerged as the winner. Mac Eoin and McCartan came second and third respectively. O'Kelly's vote was high in most areas, which was by now typical of Fianna Fáil's performance in a national election. Mac Eoin won an astonishing 61% of the vote in his native Longford, with good results in the neighbouring counties also. McCartan's best result was in Wicklow, where he received 36%.

Note: The results kept by the Department of the Environment, Heritage and Local Government for this election are organised by county, not constituency. 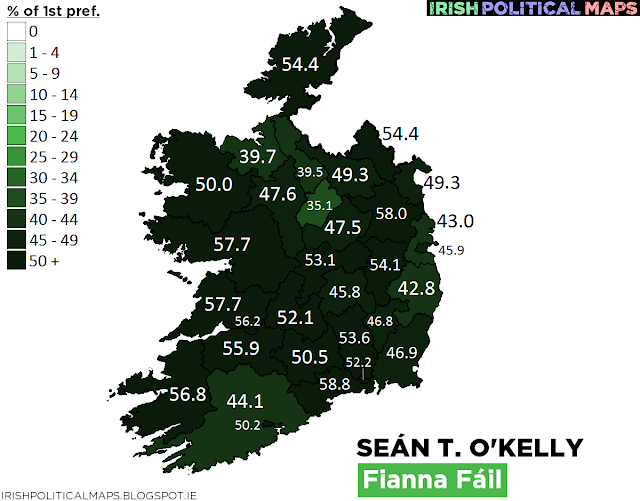 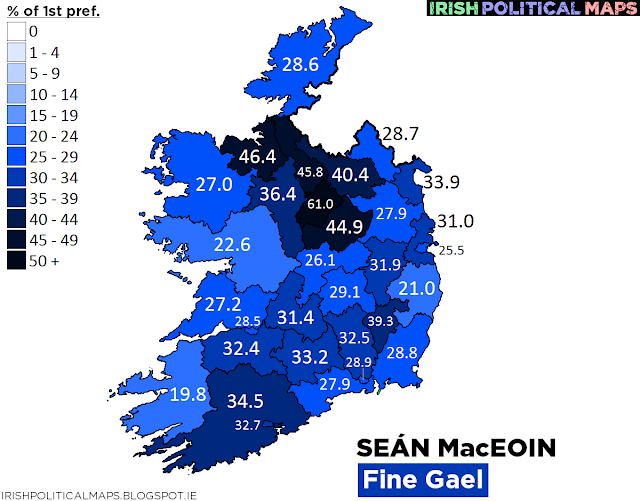 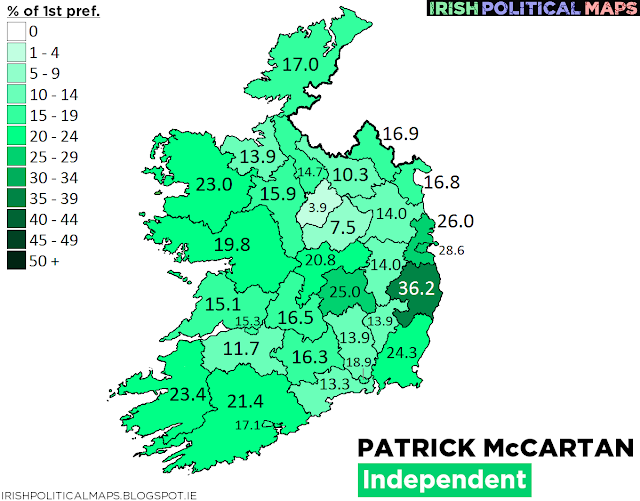 The new President was greeted by huge crowds on his way to his inauguration.. The election was not all good news for Fianna Fáil however. Despite the victory, the party were wary of growing discontent with Éamon de Valera's government, a symptom of which was evident in the transfer patterns seen when McCartan's votes were distributed. Of his votes, 117,886 went to Mac Eoin while only 27,200 went to O'Kelly. This first sign of a shift away from Fianna Fáil culminated in the general election three years later which saw de Valera's party going back to Opposition for the first time since 1932.
Posted by Jason Kelleher