While Martin McGuinness was not expected to win the election, a strong showing was anticipated. The election did not disappoint in that regard. Mr. McGuinness finished a solid third place, with a national vote share of 13.7% - an increase on Sinn Féin's share in the general election eight months previous. The results below do indicate a strengthening of Sinn Féin support, particularly in areas further south of the border constituencies where Sinn Féin typically do well. Mr. McGuinness' best results outside of Ulster were in Cork North Central, which has been represented since the general election by Sinn Féin TD Jonathan O'Brien and in Louth, which is represented by party leader Gerry Adams. He received 20% in both constituencies.

How much of this support is owed to the lack of a Fianna Fáil-nominated candidate is uncertain, but it appears that Sinn Féin's strength in the republic is much strengthened since the start of the year. It remains to be seen how it will develop from this point on. 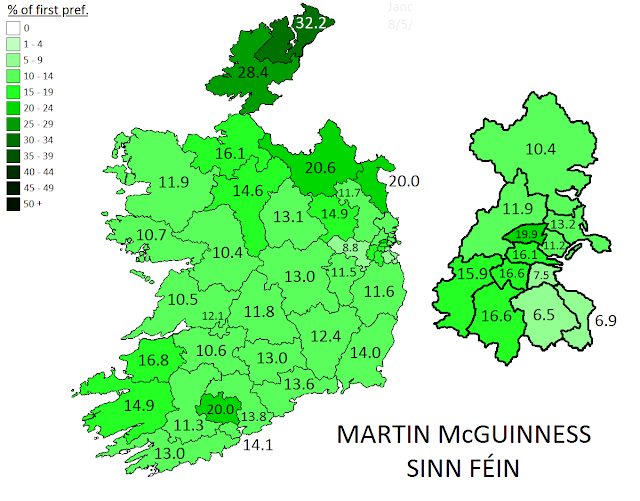