The Fianna Fáil government of the 23rd Dáil was one whose survival depended on a number of unpredictable factors. First, it was a minority administration, unable to function without the support of independent and small party TDs in the Dáil. The Taoiseach Charles Haughey had engineered this support by courting the support of the three Workers' Party deputies as well as Independents Neil Blaney and Tony Gregory - the latter in particular with a huge financial deal. Secondly, Ireland was three years into a very uncertain decade. The economy was suffering as a result of poor decisions made by the Fianna Fáil government of 1977-81, and large spending cuts were needed to bring things under control. In the campaigns of 1981 and February 1982, Haughey avoided talk of spending cuts or tax increases, instead favouring a populist approach to ensure maximum support for his party and his re-election as Taoiseach. This leads on to the third factor on which the survival of the government depended: Haughey himself.

Before the end of 1982, certain members of the Fianna Fáil parliamentary party had grown concerned about Haughey's leadership, particularly regarding his handling of the economy and the overly populist tone of the government's policies. Some startling events in the months after the election had also shaken the party. In August, a man wanted for murder was found and arrested in the home of Attorney General Patrick Connolly, with whom he was friends. Connolly resigned and Haughey described the incident as "grotesque, unbelievable, bizarre and unprecedented" - a phrase which gave rise to the term "GUBU", which came to define Haughey's period in power in this year. Certain members of the party were worried that Haughey's leadership would harm both the party and the country. A challenge was imminent.

By October, a group including Desmond O'Malley (Limerick East) and Charlie McCreevey (Kildare) put a motion of no confidence against the Taoiseach. A defiant Haughey ensured that the vote would be conducted by open roll call rather than secret ballot. As a result, the challengers were in the minority, and Haughey comfortably won the vote by 58 to 22. Simultaneously, the party had launched a new policy document (entitled "The Way Forward") which finally directly mentioned spending cuts. In response to this, Tony Gregory and the Workers' Party TDs withdrew their support for the government. Fine Gael proposed a motion of no confidence in the government, which passed and mandated another general election: the third in 18 months.

The election was called for 24 November. The media cast it as another around in a fight between Haughey and Garret "the Good" FitzGerald for governance. With Fianna Fáil in turmoil, the election was Fine Gael's chance to resume power after a six-month interruption. FitzGerald himself enjoyed a high degree of popularity, with polls showing a remarkable 51% in favour of him as Taoiseach, compared to 31% for Haughey. The Labour Party meanwhile contested its first election with new leader Dick Spring (Kerry North). At 32, Spring was (and remains) the youngest main party leader in Irish politics.

The election proved disastrous for Haughey. While initial polls showing that Fianna Fáil would lose 7% of the vote proved incorrect, it still dropped by 2% and was enough to see the loss of 6 seats. Fine Gael won 7, bringing them to 70 - just five seats short of matching Fianna Fáil. It was Fine Gael's best result ever until 2011. The Labour Party enjoyed a slight increase in both vote and seat shares, now with 16 TDs in the Dáil. Fine Gael and Labour were again able to form a coalition government. Haughey was relegated once more to the Opposition benches.

Regarding smaller parties, this election saw an increase in the number of left-leaning parties contesting: the Ecology Party, the Communist Party and the Irish Republican Socialist Party all ran candidates but failed to win seats, while Democratic Socialist Jim Kemmy lost his seat in Limerick East. The Workers' Party lost their seat in Cork East, bringing them back down to 2. The number of independents remained unchanged.

This election would be the last for five years. The coalition had the unhappy task of repairing the economy ahead of them, while Fianna Fáil reeled from its defeat, with Haughey subject to another unsuccessful leadership challenge. He would contest the next general election with the ability to capitalise on the unpopularity of the coalition after five years of harsh economic measures. The drama was far from over. 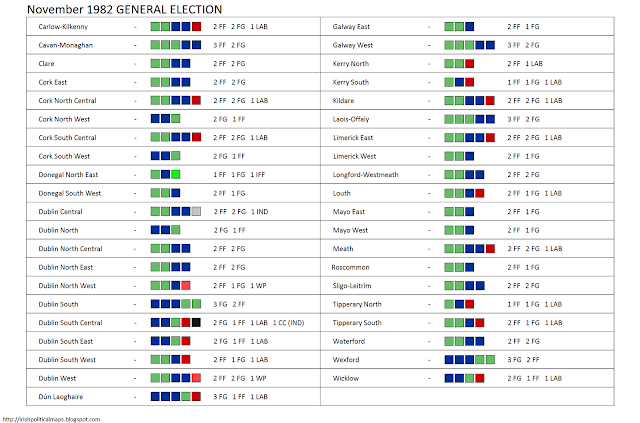