Ireland prepared for its first presidential election in 17 years in 1990, as the final term of the twice-unopposed President Patrick Hillery drew to a close. Hillery's tenure began as a sort of rehabilitation of an office which had been damaged in 1976 after the resignation of Cearbhall Ó Dálaigh. Coming so soon after the death in office of his predecessor, Erskine Childers, Ó Dálaigh's actions meant Ireland saw four presidents in one decade (de Valera, Childers, Ó Dálaigh and Hillery). The relevancy of the office itself was called into question. Was it no more than an effectual retirement home for seasoned politicians? Éamon de Valera's 14 years of presidency seemed to contribute to this opinion. Did the office have any real purpose or was it merely ceremonial? Ó Dálaigh's resignation, sparked by a public condemnation of him by a government minister, implied considerable limitation.

President Hillery's tenure was hoped to restore a sense of stability to the presidency. Though he was often perceived as being somewhat dull, Hillery succeeded in this regard and over his time in office became a highly admired president. By 1990 the presidency was important once again, with not just Fianna Fáil and Fine Gael fielding candidates, but the also Labour Party, which had never participated in presidential elections before.

The Fianna Fáil candidate was the incumbent Tánaiste Brian Lenihan senior. Lenihan's huge popularity and Fianna Fáil's perfect record in presidential elections meant his victory was considered a certainty. His chances were boosted by a disastrous start to Fine Gael's campaign. The party had attempted to convince its former leader and Taoiseach Dr. Garret FitzGerald to run, but he declined in favour of retirement at the next general election. Fine Gael next tried the former Tánaiste Peter Barry, who likewise declined. The party eventually nominated recently-elected TD Austin Currie. Until 1989, Currie had been a member of the SDLP and had been involved in Northern Irish politics. He had much less of a profile in the republic and was seen as a "last resort" candidate - he was never considered a serious challenge to Lenihan.

The Labour Party would make history with its candidate. Initially there was a strong campaign within the party to nominate former minister Noel Browne - a controversial figure in many respects. Labour leader Dick Spring was not keen on the idea and favoured the selection of a different candidate. After some internal conflicts on the matter, Labour joined with the Workers' Party to nominate former Senator Mary Robinson - the first female presidential candidate since the creation of the office in 1938. Robinson, like Lenihan, had the advantage over Currie of having a national profile. She had been involved in campaigns for contraception, divorce, the decriminalisation of homosexuality and the efforts to preserve Dublin's Wood Quay.

Robinson's nomination did not affect Lenihan's perceived chances of winning, but the campaign was to prove surprising. Brian Lenihan's involvement in attempts by Charles Haughey in 1982 to influence the actions of the president were called into question. In January of that year, then-Taoiseach FitzGerald announced that he would ask President Hillery to dissolve the Dáil and call a general election. Haughey, leading the Opposition, attempted to call the President and persuade him not to grant FitzGerald's request. FitzGerald would then have to resign and Haughey could form a government without the need for an election. President Hillery was greatly displeased to be subject to such pressure and he refused to take any calls on the matter before granting the dissolution. Lenihan had been involved in making some of these calls, a fact he freely admitted even in an interview in May 1990. By October, with the election drawing near, he declared instead that he did not participate at all in the affair. His denial was met by the Irish Times reprinting the interview held earlier in the year. His credibility had been seriously damaged, and his hitherto certain victory was called into question.

Fianna Fáil were to suffer two further setbacks, each one a boon to the Robinson campaign. In an attempt to put a stop to the controversy, Lenihan appeared on RTÉ News and declared that he had remembered incorrectly, and "on mature recollection" he had not contacted President Hillery. His request for an audience with Hillery to confirm his story was not granted, and his credibility remained tarnished. Nonetheless, he remained the favourite to win based on his own enduring popularity and the strength of the Fianna Fáil vote.

While Lenihan was attempting to end the phonecall controversy, Environment Minister Pádraig Flynn made a comment to the press accusing Robinson, whose campaign was very strong throughout the year, of having a "new-found interest" in her family to benefit her campaign. This comment backfired terribly, driving women who had been supporting Lenihan away and in to the Robinson camp. The prospect of a Fianna Fáil victory now shifted towards a Fianna Fáil defeat.


The election proved to be as dramatic as the campaign. As predicted, Austin Currie and Fine Gael polled poorly, with just 17% of the national vote behind them. Brian Lenihan survived both controversies enough to remain in first place, but fell nearly 93,000 votes short of the quota. Robinson polled in a strong second: she won 38.9% of all first preferences, with Lenihan on 44.1%. The victor would be decided by transfers, and the final result was overwhelming: of Currie's transfers, 36,789 went to Brian Lenihan while an unprecedented 205,565 bypassed Fianna Fáil and went to Mary Robinson, who became Ireland's seventh president, and the first woman to hold the office. Fianna Fáil had lost the Áras for the first time.
Distribution of first-preference votes
Click on the image to see it full-sized. A greyscale version is available here. The candidates are listed in alphabetical order. 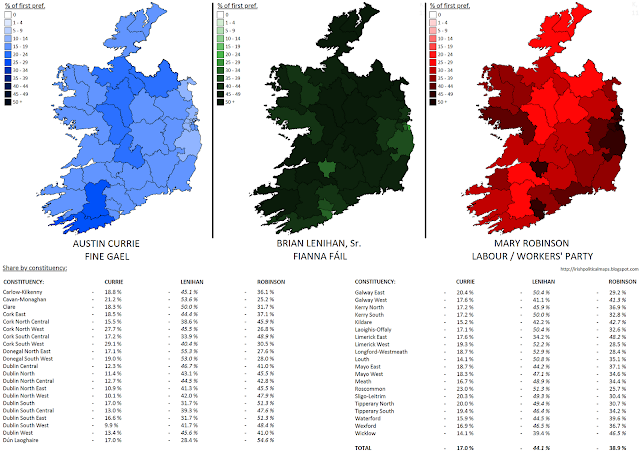 As can be seen on the maps, Robinson's strongest areas of support were big cities and urban areas. She did particularly well in Dublin, winning more than 50% of the vote in three southern constituencies. She also polled well in the cities of Cork (Cork North Central & South Central), Limerick (Limerick East), Galway (Galway West) and Waterford, as well as urban counties such as Kildare and Wicklow. This election remains the only one to date where Labour have polled so well on a national level.
Where Robinson polled well, Lenihan was not as successful - the Fianna Fáil map is notable for the lighter shades in those same city constituencies. The strong rural Fianna Fáil vote carried Lenihan - a Roscommon native - to the initial first place, but he was signifigantly weakened by Robinson's urban support. Currie fared especially poorly in the Dublin area, enjoying mild support in some Connacht and Ulster constituencies, as well as the traditional Fine Gael stronghold of West Cork.
The turnout was 64.1%.
Posted by Jason Kelleher