The 1832 general election in the UK was the first since the passing of the Reform Act of that year, which amongst other things increased the franchise and encouraged voter registration. It is also the first such election where the political affiliations of the various candidates - elected or otherwise - are easily definable. Even so, it would not be until 1885 that this problem of occasional ambiguity would be eliminated.

In Britain, this election was fought between the Whigs and the Tories, the respective forerunners of the Liberal and Conservative parties. In Ireland, the landscape was somewhat different - the Repeal Association, began in 1830 by Daniel O'Connell, sought (as its name suggests) to repeal the 1800 Act of Union which had brought Ireland in to the UK. They favoured a return to the system which had previously been in place - Ireland would control its own affairs in its own parliament, but would still recognise the monarchy.

The Association won the most seats in Ireland: 42 out of 106, but it was far from a majority - and minute compared to the national totals of the Whigs and the Tories. The Whigs won the overall election, and formed a government with the incumbent Prime Minister, the Earl Grey, returning to office.

The Repeal Association was not successful in their aim, but their strong showing was indicative enough of a high level of support. Soon after the election they would join with the Whigs, who were more sympathetic to concerns of Irish autonomy than the Tories.

The constituencies used in this election are explained here. 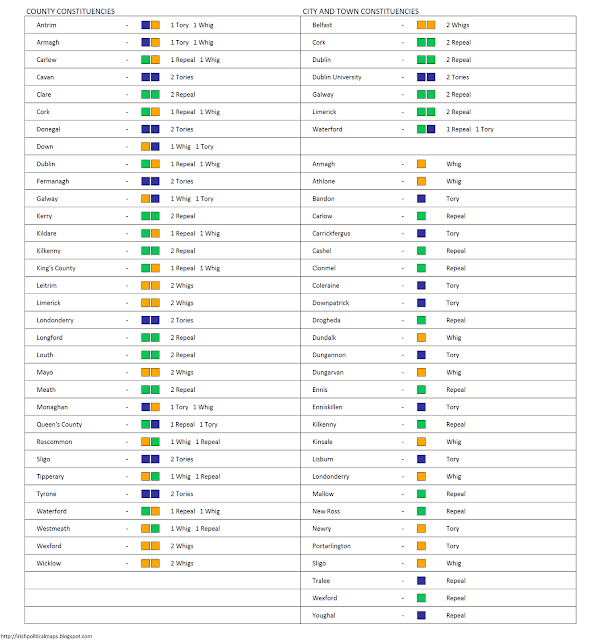