1989 saw the end of a trying decade for the Labour Party. Twice in that decade they had been in coalition with Garret FitzGerald's Fine Gael, dealing with a burgeoning recession and the fallouts of the referenda on divorce and abortion. Kerry North TD Dick Spring had led the party since 1982, and remained on when the coalition government left office in 1987. By the 1989 election the party were accustomed once more to the Opposition benches, making small gains but not moving back to government for the foreseeable future.

This was to change rather spectacularly in 1992. In the wake of a good showing at local elections the previous year, Labour fought a strong campaign independent of all other parties. Their strength at the time was all the more impressive considering that this election saw a larger number of left-wing parties than before: as well as Labour there was the Workers' Party, the Democratic Left and the Democratic Socialist Party. Labour's strength carried on to polling day, and the party returned their best result ever: 33 seats. This phenomenal result was dubbed the "Spring Tide" (a euphemism that would be partly resurrected in 2011 with the "Gilmore Gale").

What came next for Labour threw the future of this new strength in doubt. Despite ruling out a coalition deal with Fianna Fáil in the election campaign, Spring ended up bringing Labour to government with Albert Reynolds' party after all. This move was heavily criticised by a proportion of Labour supporters and members, though the coalition collapsed two years later when Labour walked out on Fianna Fáil following a number of scandals. Rather than cause another election, however, the party instead supported Fine Gael to form the next government, with the Democratic Left providing additional numbers in this new "Rainbow Coalition". Spring continued as Tánaiste under John Bruton. The idea of a rotating premiership between the two men was discussed, but never came to fruition.

The next general election occurred as scheduled in 1997, and while Fine Gael made gains, Labour suffered heavy losses, losing 8.9% of their national vote, along with 15 seats. The Spring Tide had effectively been undone. With this defeat, the Rainbow Coalition did not have the numbers to re-enter government and a new coalition of Fianna Fáil and the Progressive Democrats took over. This heavy thrashing at the polls was seen as punishment to Labour, both for breaking their promise regarding Fianna Fáil, and for changing loyalties in the Dáil in 1994, throwing Fianna Fáil out of office but keeping themselves in. Following this and Labour's poor showing in the presidential election of the same year, Spring resigned as party leader and was replaced with Dublin South East TD Ruairi Quinn. 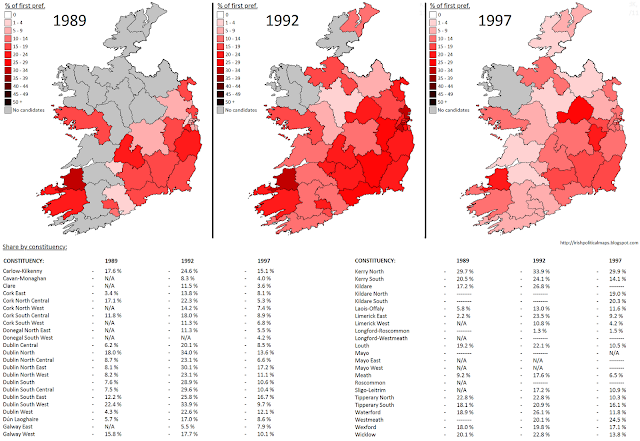