After five years of working in coalition, in January 1987 the Labour Party withdrew from government in protest at the spending cuts in the Budget proposed by Fine Gael. Taoiseach Garret FitzGerald promptly dissolved the Dáil and called a general election for 18 February. The four month campaign was hoped to be an opportunity for Fine Gael to improve public understanding of the measures in their Budget and the reasons for them, however this opportunity was unlikely to bear much fruit for the party.

Fianna Fáil entered the election in a bothered state: two years previously, four Fianna Fáil TDs left the party and formed the Progressive Democrats, which was doing especially well in the polls. Having failed to win a majority so far as party leader, Charles Haughey was under considerable pressure to deliver this time around. This pressure was not confined to the issue of the majority, however: the very fact that Fianna Fáil had splintered and a breakaway group now existed was testament to Haughey's failure to keep the party united - a particularly outstanding failure compared to his predecessor Jack Lynch's ability to keep the party in one piece despite much more intense opposition to his leadership.

The Progressive Democrats themselves were optimistic about their chances, viewing themselves as the face of liberalism in Ireland, ready to carve a space for themselves in Irish politics. The Labour Party, meanwhile, looked set to suffer. The Workers' Party hoped to increase their representation, while the Democratic Socialist Party and Communist Party enhanced the leftist options available in this election. The recently formed Green Party was running for the first time, while Sinn Féin were contesting their first election since voting to end their policy of abstentionism with regard to Dáil Éireann the previous year. This had caused a split in the party, with those who favoured the retention of abstentionism forming Republican Sinn Féin. They did not contest this election.

The campaign was fought largely on the economy. Fine Gael's Budget was a prime target for Fianna Fáil, while FitzGerald's attempts to attack Haughey's position on Northern Ireland - specifically his opposition to the Anglo-Irish Agreement of 1985 - were unable to shift the focus very much. The economy remained the key issue, and Fine Gael found themselves at a considerable loss when the results were announced. They had lost 20 seats (and 12.1% of the vote) compared to their November 1982 share, widening once again the gap between them and Fianna Fáil which had so narrowed in that election. Garret FitzGerald soon announced that he was stepping down as Fine Gael leader, and was replaced by Alan Dukes. Surprisingly, many of Fine Gael's votes were lost to the Progressive Democrats, which won a total of 14 seats (11.9%) and displaced Labour as the third largest party in the Dáil. Labour themselves lost 4 seats, returning 12 (6.5%). Labour leader Dick Spring narrowly avoided losing his seat in Kerry North, winning it by only four votes.

Fianna Fáil won the most seats, but still failed to secure an overall majority. Charles Haughey had failed to deliver. The party would form a minority government for the next two years before Haughey would make another attempt to form this majority. 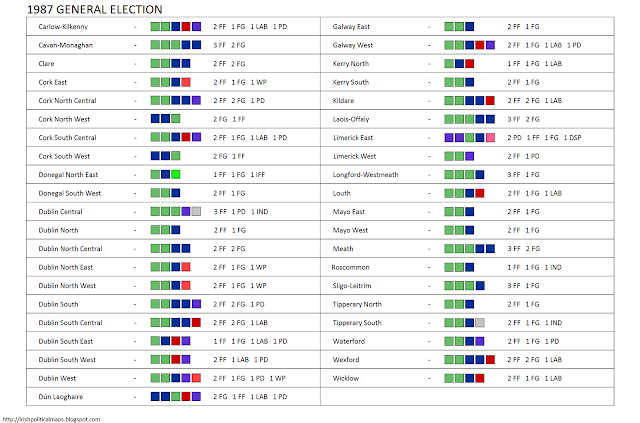