With their most successful decade yet drawing to a close, Fine Gael faced the 1990s with a degree of uncertainty. Popular leader Garret FitzGerald had resigned the party leadership and been succeeded by Kildare TD Alan Dukes, who was committed to supporting the Fianna Fáil government as per the Tallaght Strategy. The party's big gains of November 1982 were an increasingly distant memory, and it seemed the party was going nowhere under Dukes. Fine Gael backbenchers were becoming restless.

This restlessness turned to action in 1990 when Fine Gael finished last in the presidential election. Dukes was ousted as leader by the party and was replaced by former Finance Minister John Bruton of Meath. Bruton abandoned the Tallaght Strategy and hoped to improve Fine Gael's fortunes after three years of drift. His first test came with the 1992 general election. Public fatigue with Fianna Fáil was expected to give the Opposition a boost - what was not expected was that this boost would go to Labour and that Fine Gael would lose seats.

The election resulted in a hung Dáil. Fine Gael were unable to negotiate a successful deal with Labour and Dick Spring's party instead went in to coalition with Fianna Fáil. Bruton became as unpopular as his predeccesor had been, though he managed to survive a leadership challenge before a reversal of fortune in by-elections and the European elections of 1994. In that same year the Fianna Fáil-Labour coalition collapsed, and the Labour Party made a deal with a now stronger Fine Gael.

This "Rainbow Coalition", with the inclusion of Democratic Left, governed for two and a half years. In this time, a number of controversies arose, while the government enjoyed successes in other areas, specifically the economy: a budget surplus was produced for the first time in decades. By 1997 this mixed performance, combined with Bruton's own growing level of popularity resulted in the party's first electoral gains as a government party since 1951. Labour were not so lucky and endured heavy losses. The Rainbow Coalition were not able to continue in office.

The maps showing Fine Gael's support over the eight years in question illustrate much of the uncertainty experienced by the party in this time. Unlike the other two main parties, Fine Gael have not historically enjoyed steady strong support from any one region, aside from the small areas of West Cork and East Mayo. The party's share suffered in 1992 much as Fianna Fáil's did due to the Spring Tide. Alan Dukes' unpopularity as a leader is illustrated by the lack of any substantial increase in the Kildare Fine Gael vote, while the same is true of Bruton: in 1992 the Fine Gael vote in Meath actually declined, but had increased again by 1997. The party's worst showings in that year were in Kerry South - which was dominated that year by Independent Jackie Healy Rae - and Tipperary North, in which expelled former Fine Gael minister Michael Lowry also ran as an independent and attracted huge support.

The uncertainty which characterised this period for Fine Gael would only continue after 1997, as the party found itself constricted with a once again popular Fianna Fáil in government. 2002 would see this uncertainty come to a head, with the very existence of the party put into question. 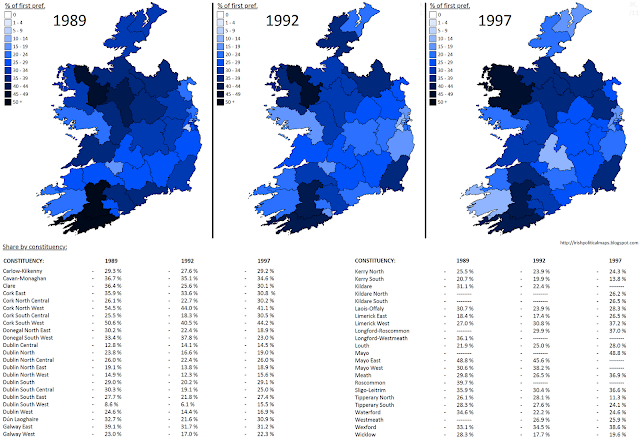