Featured below is a map showing the first preference share won by Sinn Féin in the Northern Ireland Assembly election of May 5 and the general election in the republic held on February 25.

As expected, Tyrone, Fermanagh and Newry each have heavy Sinn Féin support, which appears to be spilling across the border to Cavan-Monaghan, where popular SF TD Caoimhghín Ó Caoláin has enjoyed support since 1997, and the two Donegal constituencies, where TD Pearse Doherty is a big name since winning the Donegal South West 2010 by election in a landslide

As Northern Irish politics continues to stabilise with Sinn Féin in a power sharing role, and provided the party continues to provide a strong performance from their 14 deputies in Dáil Éireann, it will be interesting to see what the next version of this map looks like. Two projections made about the two Irish elections this year were that Sinn Féin could become the main Opposition party in the republic, and the largest party in Northern Ireland. Neither of these things happened, but if Sinn Féin continues to find fortune, they could very well happen before we know it. 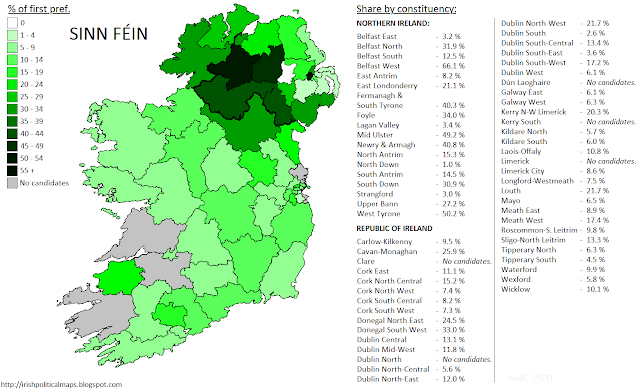