Only the second Irish presidential election since 1973, the 1997 election provided a number of surprises. Incumbent President Mary Robinson, elected seven years previously, decided not to seek a second term and resigned a few weeks before the end of her first in order to take up a new role as UN High Commissioner for Human Rights.

The main parties, as standard, produced their candidates for the election: Fine Gael nominated Dublin MEP Mary Banotti. Fianna Fáil were expected to nominate former Taoiseach Albert Reynolds, but in another surprise he came second in the party vote to Northern-born academic Dr. Mary McAleese, who was amongst other things Pro-Vice Chancellor of Queen's University Belfast and Director of Channel 4 television. Labour, which had nominated Robinson in 1990, joined with the Democratic Left and the Green Party to nominate Adi Roche, the chief executive of the Chernobyl Childrens' Project.

The contest did not end with the three party candidates however. In an unprecedented move, singer and former Eurovision winner Dana Rosemary Scallon secured the support of five county councils to run as an independent candidate - as did another, retired Garda Derek Nally. For the first time, therefore, there were five candidates running in a presidential election - four of them women.

The contest was an easy one for McAleese and Fianna Fáil. Both Nally and Roche were hindered in their campaigns - Nally's had internal problems and he did not have the national profile the other candidates enjoyed, while Roche failed to build up a strong enough showing of support. Scallon secured a considerable amount of support which, while not enough to get her elected, was still unheard of for a non-party candidate. In the election her vote averaged at 14%. Banotti did well in both the campaign and the election, but was still no match for McAleese, who won an enormous amount of support in the election with 45.2% of the national vote and became Ireland's eighth president. 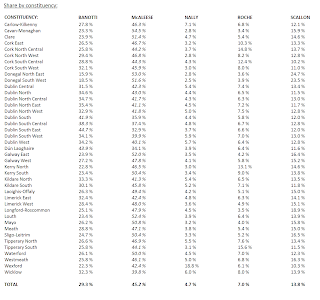 When McAleese's first term drew to a close in 2004, most of the political parties declined to run a candidate against her. Green Party TD Eamon Ryan declared that he was interested in running, but he failed to secure the support necessary to become a candidate. Independent Senator David Norris also considered the possibility, but likewise did not have the support. With no candidates against her, McAleese was re-elected unopposed for her second term, which expires in November 2011.

The turnout for the election was a surprisingly low at 47.6%.

Below are the first preference shares received by each candidate. 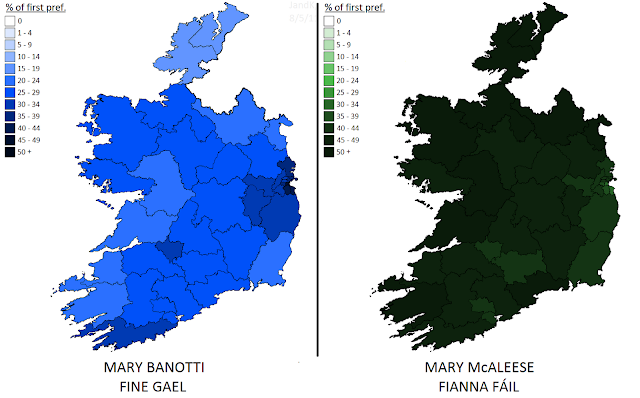 Banotti did particularly well in Dublin and the surrounding areas, as well as Limerick East and the Fine Gael heartland of Cork South West. Nally did poorly in all constituencies but Wexford. Roche fared likewise, aside from her home areas of Tipperary South and Cork. Scallon did particularly well in Donegal and the West, while McAleese's map shows the large amount of support she won in all areas. 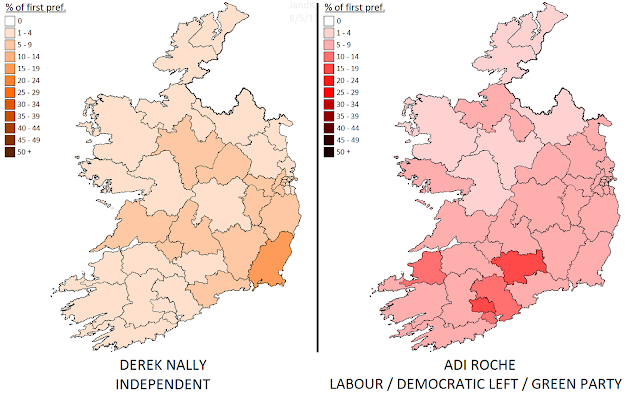 The number of candidates in this election would remain a record for 14 years before being beaten. 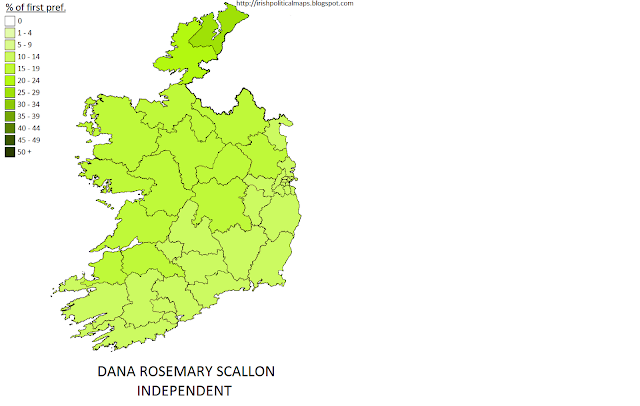