The economic crisis to hit Ireland and elsewhere in the world in late 2008 saw the FF/Green government of Brian Cowen undertake a series of measures which were met by considerable criticism from the public, not least the bailing out of Anglo Irish Bank. The Cowen government's attempts to stymie the effects of the recession proved disastrous, leaving it with no choice but to submit Ireland's economy to the control of the EU, the ECB and the IMF. This action catalysed immense public opposition to Fianna Fáil, the likes of which the party had never experienced before. The Green Party withdrew from government, while Fine Gael, Labour and Sinn Féin surged in opinion polls over the huge decline of Fianna Fáil. Cowen's own leadership was challenged by his former Foreign Minister Micheál Martin, and in January 2011 he announced that he was resigning as leader of the party and as Taoiseach, after the general election he had set for that February. 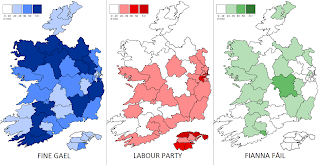 As expected, Fine Gael and Labour made huge gains in the election, although the former did not win enough seats to have an overall majority. Labour, although peaking too early in opinion polls, still returned their best election result ever - the "Gilmore Gale" had eclipsed the "Spring Tide". The two parties went into government together, their combined total of 113 seats giving them the largest majority ever enjoyed by an Irish government. Fianna Fáil was in ruins, returning just 19 TDs (exclusing Louth's Seamus Kirk who was automatically returned as Ceann Comhairle). The party won just one seat in Dublin, that of Brian Lenihan in Dublin West. Sinn Féin more than doubled their seat total to come within a few seats of overtaking the formerly dominant party.

For a party which just nine years earlier was finding its obituaries being written, Fine Gael had already made an impressive comeback in the 2007 general election. This time they capitalised on Fianna Fáil's losses to become the largest party in the Dáil for the first time. It was their best election result since the November 1982 general election which gave Garret FitzGerald 70 seats. The Fine Gael vote increased substantially in nearly all constituencies, not least in party leader Enda Kenny's Mayo, which returned 4 Fine Gael TDs in total. Only in Dublin North West did the party fail to win any seats. Fine Gael's weakest areas where Sinn Féin or independents polled highly, such as Kerry, Donegal, Cork North Central and Tipperary.
Labour Party

For a brief time in 2010, the Labour Party emerged from opinion polls as the most popular party. Speculation followed as to whether Labour could capitalise on the inevitable vacuum left by Fianna Fáil, and the party itself began to use "Gilmore for Taoiseach" as a slogan. Unfortunately for Labour, their peak came too early and they found themselves in second place in subsequent polls - although this was still better than their perennial third place position. The party emerged as the biggest in Dublin, and it regained seats in many areas it had taken during 1992's Spring Tide. Outside of Dublin, its biggest successes were in Cork East, where Seán Sherlock retained his seat and Longford-Westmeath, where popular TD Willie Penrose retained his. Joan Burton in Dublin West was the first TD to be officially elected to the new Dáil.
Fianna Fáil

As mentioned above, Fianna Fáil lost all but one of its Dublin seats, and shed seats heavily throughout other areas of the country. The party's vote share plummeted by over 24%. Only in Laois-Offaly, home of the soon-to-be former Taoiseach Brian Cowen, and Cork South Central, Micheál Martin's constituency, returned more than one TD. The retirement of many big-name TDs prior to the election meant that the party had only a limited number of recognisable faces to put forward. Some, such as Martin, Dara Calleary and Willie O'Dea, retained their seats while others such as Dick Roche and John O'Donoghue, lost theirs. The party suffered a further setback later that year in the by-election after Brian Lenihan's untimely death, in which Labour took the vacant seat and Fianna Fáil was left with no TDs in Dublin.
Sinn Féin

Sinn Féin entered the election well placed to make gains, albeit not to the extent of the bigger two Opposition parties. The party made significant gains in the Ulster constituencies - an indication of their strong support in the constituencies on the other side of the border, as well as the popularity of figures such as Pearse Doherty and Caoimhghín Ó Caoláin - not to mention the victory of party leader Gerry Adams in Louth. Aside from Ulster, Sinn Féin made gains in Dublin, Meath, and Cork, as well as retaining their Kerry North seat. With Fianna Fáil vanquished and fatigued, Sinn Féin came to be regarded by commentators as the "real" Opposition in the Dáil, and indeed in the party has been quite active in that role. While the results of the next general election are unpredictable at this time, it seems likely that Sinn Féin will make further gains and continue to grow south of the border as it has in the North.

Prior to the election, the Socialist Party, the People Before Profit Alliance and the Workers and Unemployed Action Group (WUAG) announced that they would run candidates under a single United Left Alliance banner. Five ULA candidates won seats - the Socialist Party and the PBP each winning 2 in Dublin, and WUAG leader Seamus Healy retaining his in Tipperary South. Aside from these successes however, the vote shares enjoyed by ULA candidates was not particularly strong, with much of the non-Labour left vote going to Sinn Féin.