The 1992 general election saw a good deal of change on the Irish political landscape. Fianna Fáil entered their first election since 1977 without Charles Haugher as leader. Haughey resigned from political life with this election, as did the former Fine Gael leader, the late Garret FitzGerald. The retirement of the two Taoisigh of the 80s marked the end of a period of Irish politics. Fine Gael also had a new leader - John Bruton had taken over from Alan Dukes in 1990, leaving Dick Spring and Dessie O'Malley as the only major party leaders facing this election as incumbents.

The election proved highly successful for Labour - they won a record 33 seats in whatw as dubbed the "Spring Tide". Likewise their share of the vote rose by a phenomenal 10%, at the expense of Fianna Fáil and Fine Gael, which lost 9 (5.1%) and 10 (4.8%) seats respectively. The Progressive Democrats recovered some of their losses from the 1989 general election, bringing them to 10 seats. The new Workers' Party splinter group, Democratic Left, kept 4 of the 6 seats they had held as Workers Party members. Of these 4 were future Labour Party leaders Pat Rabbitte and Eamon Gilmore. The Workers' Party itself won no representation in the new Dáil, while the Green Party's Trevor Sargent held his seat in Dublin North. Four Independent TDs were elected, including IFF's Neil Blaney. Sinn Féin ran candidates but failed to win any seats.

With no party securing an overall majority, a coalition deal was inevitable. A "Rainbow Coalition" of Fine Gael, Labour and the Democratic Left was proposed, but the three parties did not have the numbers required for a majority. Controversially, Dick Spring brought his party in to coalition with Fianna Fáil. This was a highly unpopular move amongst Labour supporters. The Fianna Fáil-Labour government would last just two years, but thanks to by-election victories in that time, the so-called Rainbow Coalition was now a possibility, and Labour crossed the floor to join Fine Gael and Democratic Left in a new government with John Bruton as Taoiseach. Albert Reynolds retired at this point, to be replaced as Fianna Fáil leader by Dublin Central TD Bertie Ahern. 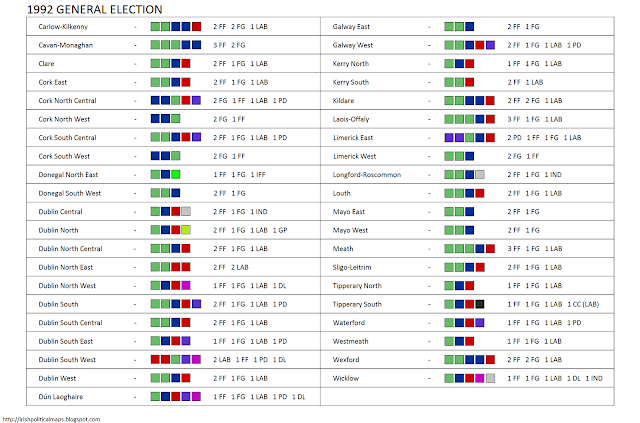