In 1989, Taoiseach Charles Haughey called a snap election for two reasons: the government had been defeated in the Dáil over a vote on funds for AIDS sufferers, and more importantly, Haughey believed that Fianna Fáil's strong standing in opinion polls meant that the party could secure the elusive overall majority it had lost in 1981. The former reason was not strictly necessary, and the latter proved to be very unwise.

Fianna Fáil had operated as a minority government for the past two years, supported in the Dáil by Fine Gael under the "Tallaght Strategy", where the main Opposition party would vote with the government on matters of national importance, rather than oppose for opposition's sake. Even so, Haughey was uncomfortable in a minority administration, and hoped to emulate Jack Lynch's overall majority of 1977. Senior figures within Fianna Fáil did not agree that a general election at this time was a good idea, but the Dáil was dissolved nonetheless.

Haughey's miscalculation was soon laid bare: Fianna Fáil's share of the vote remained unchanged at 44.2%, but the party lost 4 seats, while Fine Gael gained 5 and Labour gained 3, their votes also increasing (by 2.2% and 3.0% respectively). Fine Gael announced it was dropping the Tallaght Strategy. Now unable even to form a minority administration, Fianna Fáil found themselves in their worst election yet. The prospect of yet another election loomed as the hung Dáil was unable to elect a Taoiseach, neither Haughey nor Fine Gael leader Alan Dukes having the numbers to enter government. At the eleventh hour, a government was formed by Haughey, but at a significant price for Fianna Fáil - for the first time ever, the party was forced to abandon its long-standing taboo about entering into coalition governments. Worse still for the party's morale, their new partners in government were the Progressive Democrats, those who had left Fianna Fáil in 1985 in protest at Haughey's leadership. The PDs were not highly regarded by Fianna Fáil members as they had deserted 'the party' - being forced to rely upon them to secure a majority in the Dáil was humiliating for Fianna Fáil.

As mentioned above, Fine Gael and Labour did well in this election, though they still fell short of being able to revive their own coalition government from two years previous. The Progressive Democrats themselves lost 8 of their 14 seats (and 6.4% of their vote), though this ultimately did not affect their potential "kingmaker" role in the hung Dáil. The Workers' Party gained 3 seats (+1.2%), though this would be the party's last victory before many of their TDs broke away to form Democratc Left in 1992. Jim Kemmy's Democratic Socialist Party kept their single seat - Kemmy's own - in Limerick East, while Sinn Féin once again ran candidates but failed to win any seats (their vote also decreased by 0.6%). The Green Party, meanwhile, enjoyed their first general election victory, with Roger Garland winning a seat in Dublin South. Independent Fianna Fáil predictably remained in Donegal North East, whilst other independents filled three seats between them. 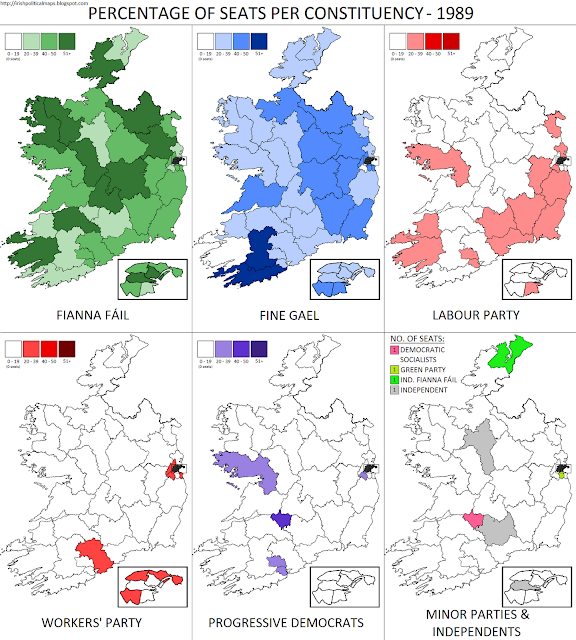 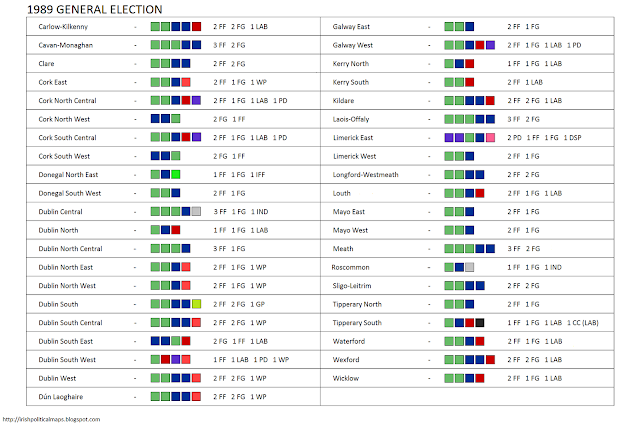