The Green Party is one of few parties to be active in both Northern Ireland and the Republic, and only the second-most successful of these parties, behind Sinn Féin. The 1990s saw the Greens slowly growing in the Republic, culminating in 2007 in their first election with a candidate in every constituency. This election was the party's best - they won their highest national share of the vote (4.7%) and though they did not gain any extra seats, they kept their representation at 6 seats, and were seen as potential king-makers for prospective coalitions. The idea of the Greens forming a coalition with Fine Gael and Labour was briefly mooted, but as was the case in 1992, the Opposition parties did not have the numbers to secure an overall majority. Meanwhile, with their partners the Progressive Democrats crushed in the election, Fianna Fáil were in need of new support. Thus, the Green Party made the controversial move to support Fianna Fáil in government.

Again as in 1992, this decision was not popular with some of the party's support base. High-profile names such as Patricia McKenna left the party, and the Fís Nua party was set up by those who had become disillusioned with the Greens. The 1992 comparison does not end there, for in the next general election in 2011, the Greens were punished just as Labour were in 1997. With the economy in serious trouble, the smaller Green Party was easier to disregard than Fianna Fáil, and they found themselves losing 2.9% of the vote and all 6 of their seats. The 31st Dáil was the first since 1989 to feature no Green deputies.

The party's Northern Ireland branch has never fared as well as its counterpart across the border, though its leader Steven Agnew was elected MLA for North Down in the 2011 Assembly elections. The Greens' success in North Down - also a strong Alliance Party constituency - may be an indicator of a greater shift towards parties with no relation to the sectarian divide that plagued Northern Ireland for so many decades.

What the future holds for the Green Party is now very uncertain, particularly in the Republic. Whether they manage to rebuild their support and eventually their representation or go the way of the Progressive Democrats into political oblivion is yet to be seen.

The coincidence of Dáil and Assembly elections in 2007 and 2011 allows me to map the party on an all-island scale for those years. Though there was a year between the 2002 Dáil election and the 2003 Assembly election, their results are combined on one map both for completeness and as an adequate indicator of the Green vote in that period. 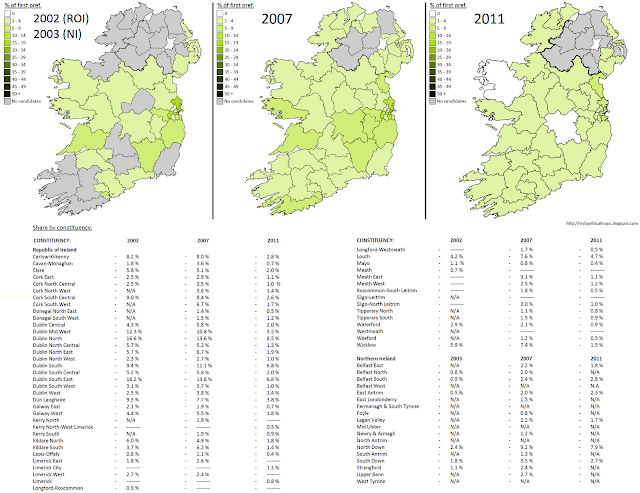