This version of the Seanad consisted of 60 members, who were to be elected to twelve year terms (with 15 members up for election every three years, similar to the manner in which US Senators are elected). This election would be held by Proportional Representation across a single 15-seat constituency made up of the entire state. With the establishment of the state in 1922, this model was delayed, as it was deemed more efficient for the new senators to be elected instead by the members of Dáil Éireann (half of them were elected this way, the other half were directly appointed by President W.T. Cosgrave, the head of government). The first proper Seanad election would therefore take place in 1925.

It was hoped that the Seanad could foster a sense of political unity in the new state, and in this line of thinking many of Cosgrave's appointees were Southern Unionists, who felt alienated from the new Free State and its government. A substantial number of the appointees were also members of nobility.

This Seanad was slightly more powerful than its successor, in that it could delay Dáil bills for longer, though it still could not veto them.

The 1925 Election:
In 1925, nineteen Seanad seats were up for election (the 15 planned for plus four vacant seats). The Free State was still adjusting to its new status quo, while Cosgrave's Cumann na nGaedheal government sought to secure law and order in the state and to develop its economy. Republican opposition to the Anglo-Irish Treaty had not lessened - 37 Senators' homes had been destroyed by arson attacks by this time - and the political climate was still somewhat turbulent.

There were three different ways by which individuals could run for election to the Seanad: outgoing Senators could nominate themselves (all 19 did so), the Seanad as a whole could nominate as many candidates as there were outgoing seats, and the Dáil could nominate twice the number of vacancies (in this case 8). Cumann na nGaedheal did not officially endorse any candidates, but a total of 33 candidates in the election were either proclaimed as or deemed to be Cumann na nGaedheal supporters. The Labour Party ran 8 candidates (3 of whom were outgoing) as did the Farmers' Party, which had one outgoing Senator. The remaining 27 candidates were either independent or of unknown affiliation. There were 76 candidates altogether.

The candidates largely represented two groups: farmers (most of whom were Farmers' Party nominees) and the professional classes. Sinn Féin leader Éamon de Valera announced that his party would boycott the Seanad election, as the party was still in staunch opposition to the Anglo-Irish Treaty. There were, therefore, no republican candidates for the Seanad.

Pro-Cumann na nGaedheal candidates won 41.6% of the vote overall, winning 8 out of the 19 seats. Labour and the Farmers' Party each performed similarly, at 15.3% and 14% respectively (winning 3 seats each), while the remaining candidates secured 21.4% and 5 seats between them. 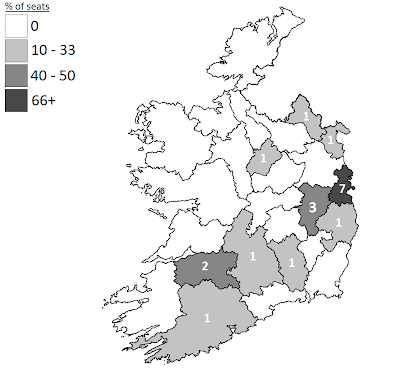 Although the election was technically national, with the entire state as a single constituency, candidates found themselves having to rely heavily on local support. Dublin boasted the most candidates, and the most victors, thanks to its high population.

The map to the right shows the geographic distribution of the victorious candidates.

The map below shows the geographic distribution of the victorious candidates by party/affiliation.

The extent to which candidates required local support is evident from these maps. Pro-Cumann na nGaedheal candidates and independents are evenly distributed (though still heavily biased towards the east), while the only Labour victors were resident in the traditional Labour strongholds of Dublin and Kildare. Likewise, the Farmers' Party was only victorious in the south and in Dublin.

Aftermath:
The turnout for the election was a dismal 23.4%. The reason for this has been attributed both to the republican boycott and to bad weather on the day. Turnout was lowest in Connacht. Blame was also levelled on the unwieldy ballot papers (56cm long and 41cm wide) resulting from the whole state being a single constituency - everyone who voted had 76 candidates to choose from, with very few of them having any national profile whatsoever.

Counting took a month, with 45 counts in total. Some special interest groups lost out heavily in the election. The Irish language revival movement failed to secure victory with any of their four candidates, including outgoing Senator (and future President) Douglas Hyde. Likewise, Unionists fared very poorly.

Recognising the utter failure of the existing system, the Oireachtas formed a joint committee in 1928 to alter the Seanad nomination process. Éamon de Valera, now sitting in the Dáil as Leader of the Opposition with his new Fianna Fáil party, favoured abolishing the popular election of Senators and restoring the system by which members of the Dáil would vote for them instead. The Constitution was amended accordingly, and the 1928 Seanad election was a purely Oireachtas matter.

By 1936, de Valera had succeeded Cosgrave as President of the Executive Council and was in the midst of making many changes to the nature of the Free State in order to bring it closer to his vision of an independent Ireland. The Seanad routinely opposed and delayed his measures. In response, de Valera moved to abolish the Seanad itself. The Seanad opposed its own abolition, but was overruled by the Dáil. It was succeeded by de Valera's own, less powerful version of Seanad Éireann with the enactment of Bunreacht na hÉireann the following year. This new Seanad would be elected by members of the Dáil, members of councils and university graduates, with a small number appointed directly by the Taoiseach.
Posted by Jason Kelleher