Fifty years of prejudice and resentment had by the 1970s exploded into anger and violence in Northern Ireland. While the 1960s had seen peaceful marches for civil rights for Catholics, the next decade saw shootings and bombings conducted by a newly resurgent IRA on one side and loyalist paramilitary groups on the other. The escalating violence and political instability pushed the British government to suspend the Northern Ireland parliament in 1972 and impose direct rule. While this did remove the immediate effects of the dominance of the Ulster Unionist Party - many of the members of which were completely opposed to giving any concessions to the "other" side, it was nowhere near being a permanent solution.

The British government began a long quest to find a solution to the Troubles with the publication of their white paper Northern Ireland Constitutional Proposals. Recognising that the unassailable dominance of the UUP had been a contributory factor in the problems now engulfing the region, Westminster's paper called for the replacement of the old Stormont House of Commons with a 78-member Northern Ireland Assembly. The constituencies would no longer be single-seat, as was the common practice in the UK, but would now be multi-seat with elections done by proportional representation, as was the practice in the Republic of Ireland.

The white paper became law in May 1973 and new elections were called for 28 June. An optimistic mood accompanied these moves, as the Assembly was accepted by the Social Democratic & Labour Party, the new leading nationalist party, and the UUP, although a minority of opponents did exist within the latter. Likewise, the more hardline elements of the nationalist side, represented primarily by Sinn Féin and other republican groups, refused to accept the white paper's proposals and boycotted the elections.

In the elections, the UUP and the SDLP came out on top as expected. A number of anti-white paper elements were also elected however, particularly on the unionist side. As well as the UUP minority, Ian Paisley's Democratic Unionist Party and William Craig's Vanguard Unionist Party had won a substantial number of seats. Regardless, negotiations commenced between the pro-white paper parties, led by SDLP leader Gerry Fitt and UUP leader and former Northern Ireland Prime Minister Brian Faulkner on the formation of the power-sharing executive. The pro-white paper Alliance Party, which began life as a moderate unionist party, was also a part of these talks and the eventual agreed executive, which was accepted by all three parties, though the vote in the UUP was close (132 to 105).

Once the executive was established, talks began in Sunningdale between it, the British government and the Irish government on setting up the Council of Ireland, the provision for which had been in place since the 1920 Government of Ireland Act which divided the island. Although the functions of that Council would only have been minor (specifically concerning tourism, conservation and animal welfare), many unionists resented any interference by the Republic of Ireland in Northern Irish affairs. Unionist opposition grew, not just between the DUP and the Vanguard party but also in the UUP itself, which withdrew its support for the Sunningdale Agreement in 1974 unless the Republic deleted Articles 2 and 3 (concerning national territory) from its constitution.

In that same year, a strike by the loyalist Ulster Workers' Council brought shortages in supply and electricity, as well as further unrest and rioting, to the region. Brian Faulkner resigned as Chief Executive of the Northern Ireland Assembly and the body collapsed. It had been a failure, but future attempts and talks at bringing stability to the politics of Northern Ireland would continue to use the power-sharing model as a basis for ensuring that stability. In this instance, as was the case with Terence O'Neill's reforms in 1969, hardline unionist opposition brought down what they feared as concessions towards the aspirations of the Republic. It would take some time yet for groups such as the DUP to come around to accepting anything like what was agreed at Sunningdale in 1973.

A note on the totals: In West Belfast, the UUP, Vanguard and independent unionists candidates (each of whom secured election) ran both under their party/independent labels and also as the "West Belfast Loyalist Coalition". Some sources count these three as WBLC members, not as members of their respective groups. I have counted them amongst their groups, therefore the three WBLC members are found in the maps for the UUP, the Vanguard party and the Independents;

Brian Faulkner's Ulster Unionist Party had been the dominant party in Northern Ireland since its inception. In agreeing to power-sharing with the SDLP it had come a long way from the uncompromising opposition shown by many of its members to the moderate reforms proposed by Terence O'Neill four years earlier. Opposition to the new proposals did exist, however, and UUP candidates ran either as being pro-white paper, or anti-white paper. Some changed sides upon election. The maps below show the seats won by each side as they campaigned. Later defections are not shown. In contrast to the gerrymandered constituencies of the former Northern Ireland parliament, the new constituencies allowed a better picture of where UUP support was centered, particularly in Belfast and in North Down. Their vote fell below 30% in West Belfast, Armagh, Tyrone and Fermanagh, areas which have traditionally had substantial nationalist populations.

The Nationalist Party of Northern Ireland (see below) had faded quickly from prominence in the 1970s, to be replaced by the new SDLP established by Gerry Fitt, John Hume and Austin Currie, each veterans of the civil rights marches. Although nowhere near the seat total won by the UUP, the SDLP's 19 seats were a strong showing, particularly when contrasted to the poor performances of the Nationalist Party in previous general elections. Just as the new system exposed the UUP's strong points, the SDLP's votes revealed a strong nationalist presence to the west of Lough Neagh, as well as in South Down and Armagh. Indeed the only areas where the party's vote fell below 10%, and where they won no seats, were South and East Belfast and North Down, all strongly unionist areas. SDLP leader Gerry Fitt became deputy chief executive under Brian Faulkner, a practically revolutionary idea at the time which is now the standard practice in Northern Ireland.

Although the DUP would one day replace the UUP as the dominant party of unionism in Northern Ireland, in 1973 it was still only beginning to find its base. The party enjoyed moderate success in the north-eastern constituencies, particularly Ian Paisley's home constituency of North Antrim, where as well as winning his own seat Paisley brought in his running mate James Craig. The DUP were opposed to power sharing, and Paisley supported the strike which eventually brought down the Assembly.
Vanguard Progressive Unionist Party

The Vanguard Progressive Unionist Party was established by the former UUP member and Minister for Home Affairs William Craig. A hardline unionist, Craig had opposed the abolition of the Northern Ireland parliament in 1972 (famously describing it as Ulster's "El Alamein") and was opposed to any form of power sharing with nationalists. Although a unionist, Craig also considered the idea of forming an independent Ulster, although this idea did not meet much widespread support outside of his followers. The Vanguard party did particularly well across Northern Ireland, even in the nationalist areas of Fermanagh, Tyrone and Armagh. Ironically the only areas they did not win seats were the largely unionist North Down and Belfast constituencies, which put their support behind the UUP, the DUP and the Alliance Party.
Alliance Party

Originally a moderate unionist party, the Alliance Party of Northern Ireland soon evolved into a cross-community party seeking to move the political culture of the region away from the nationalist-unionist divide. Although it won as many seats as the DUP and the Vanguard Unionists, its support was more localised in Antrim and North Down. It performed particularly well with 16.2%. A supporter of power-sharing, it took part in the executive talks and emerged with its leader Oliver Napier as Legal Minister and head of the Office of Law Reform.
Labour Party of Northern Ireland

The Labour Party of Northern Ireland (NILP) traditionally enjoyed moderate success in the Belfast constituencies of the old system. In this new, single-seat system, they were less likely to make any real gains. Tellingly, their only seat came from West Belfast, which geographically comprised of much of the former Belfast constituencies.
Independents 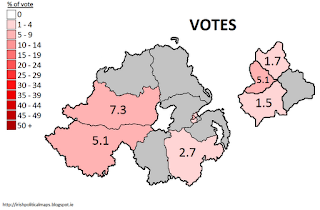 The emergency powers employed by the former government in 1970 allowed for, amongst other measures, the banning of Sinn Féin and the IRA. Consequently, Sinn Féin candidates for election could not use the party name. Also in that year, Sinn Féin itself experienced a split. One side, Official Sinn Féin, chose to abandon violence as a means to their objective and instead turned to a more Marxist approach to achieving Irish unity by eliminating class divisions. Official Sinn Féin would later become the Workers' Party of Ireland, while the other side of the split became known as Provisional Sinn Féin. They continued the established aim of achieving unity through violence. Still technically a banned organisation, the Official Sinn Féin candidates for this election ran under the "Republican Clubs" banner. Although they secured a reasonable vote in Fermanagh and Tyrone, they did not come near to winning any seats on this first outing.
Nationalist Party 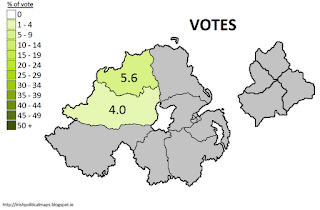 Having lost many members to the SDLP, the Nationalist Party found itself in a much diminished role in the 1970s. It only ran candidates in the Londonderry and Mid-Ulster constituencies, with little success. The fact that the Londonderry candidate was the popular former MP and party leader Eddie McAteer did little to sway the public as the SDLP's John Hume represented a new way forward for the nationalist community in Derry. In total, the Nationalist Party won just 0.9% of the vote. This would be its last election. As was the case with the NILP, Republican Labour only ever enjoyed success in Belfast, and this success did not transfer easily to the new political system. With just 4.2% of the vote in West Belfast and 0.2% across the region, Republican Labour was another party which would bow out of Northern Irish politics in this election.
Other Parties
Other, much more minor parties attempted to contest seats in this election, in South Down and in West Belfast.
Related to the British Liberal Party, the Ulster Liberals were a unionist party which had only previously enjoyed success in Queens University Belfast, now no longer afforded parliamentary representation. Two ventures, in South Belfast and South Down, produced dismal returns for the party, which faded from the political scene thereafter.
Perhaps the most bizarre party to take part in this election was the British National Front party, a far right "whites-only" party which campaigned for the deportation of all non-white peoples from Britain. The party curiously ran a candidate in South Down. William Annett won just 591 votes, coming third last overall ahead of a minor Republican Clubs candidate and the Liberal candidate Berkley Farr.
The Communist Party of Ireland, meanwhile, came dead last in the entire election, with just 123 votes in West Belfast.
Posted by Jason Kelleher