The 1989 elections took place under a different climate from the last elections five years previously. In that time, the Fine Gael-Labour coalition had collapsed and was replaced once more by Charles Haughey's Fianna Fáil. Garret FitzGerald had stepped down as Fine Gael leader, and his replacement Alan Dukes was supporting the government as per the Tallaght Strategy. A new party, the Progressive Democrats, had been set up by several former Fianna Fáil TDs, led by Des O'Malley. For the first time, the European elections were held together with a general election, as Haughey sought to achieve the long elusive overall majority he had hoped for since 1981. This would mean that the results of the former would inevitably be overshadowed by those of the latter, but there were still some surprises and changes in store as far as Ireland's MEPs were concerned.

The general election saw Fianna Fáil having to go in to coalition for the first time, with the Progressive Democrats. The European election saw the larger parties lose seats to an increasing array of smaller parties, many of which would play a large role in the decades ahead. 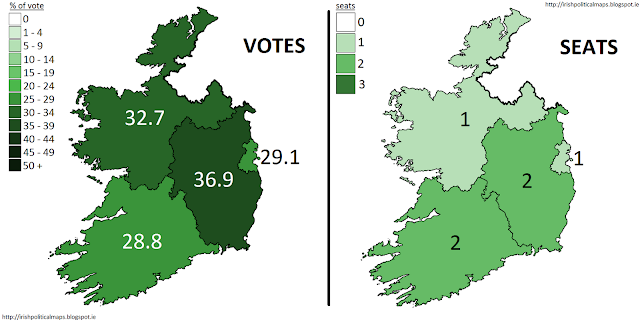 While still doing well in this election, Fianna Fáil found their vote share had dropped by 5% from 1984, and over 14% lower than their vote share in the concurrent general election. Two seats were lost. Several new candidates ran this time. In Connacht-Ulster, Mark Killilea Jr. was joined by the controversial former Defence Minister Seán Doherty. Only Killilea won a seat there, as Independent Fianna Fáil TD Neil Blaney regained the seat he lost in 1984. In Leinster Patrick Lalor and Jim Fitzsimons were comfortably re-elected, as was Niall Andrews in Dublin. Eileen Lemass, however, lost her seat there. In Munster, Gene Fitzgerald held his seat while Paddy Lane replaced the retiring Sylvester Barrett.
Fine Gael 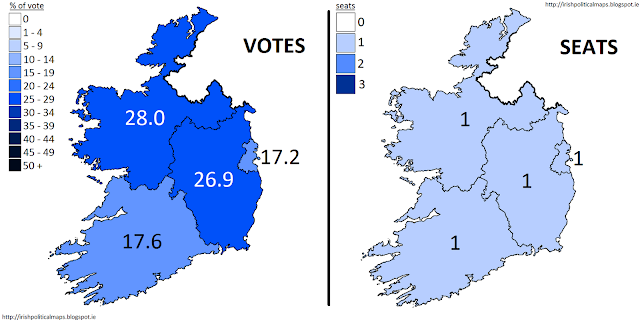 Although voters had already given their verdict on the former Fine Gael government in 1987, the party was still in for some punishment two years later. Like Fianna Fáil, they lost two seats, which was attributed not only to the rise of the smaller parties but also to the perceived ineffectiveness of Alan Dukes as leader. The last-place position of the Fine Gael candidate in the next year's presidential election saw the anti-Dukes sentiment increase, and he stepped down to be replaced by John Bruton. Fine Gael held their seats in Connacht-Ulster and Leinster, and lost one each in Munster and Dublin. John Cushanan was a new face elected in Munster, replacing one of the two outgoing MEPs there. The retirement of Richie Ryan meant that Mary Banotti was the sole Dublin MEP, while Patrick Cooney had previously replaced Mark Clinton in Leinster.
Progressive Democrats 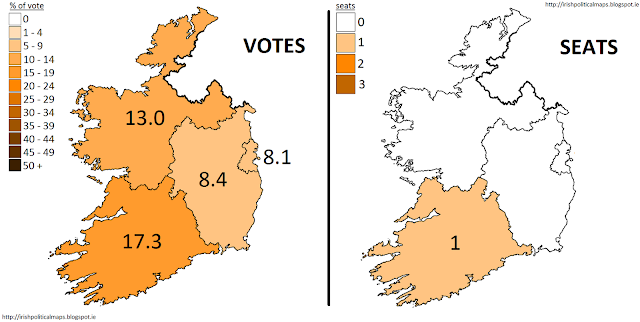 The general election was a bad one for the new Progressive Democrats, with the loss of eight seats. Their first European election wasn't an entirely positive experience either, with the exception of Munster where Pat Cox topped the poll. He would later become President of the European Parliament. No other seats were gained by the PDs. Their vote was strong enough in Connacht-Ulster, where Bobby Molloy came fifth overall, while it was much less remarkable in Leinster and Dublin, where John Dardis and Mary Harney each failed to come anywhere near winning a seat.
Labour Party 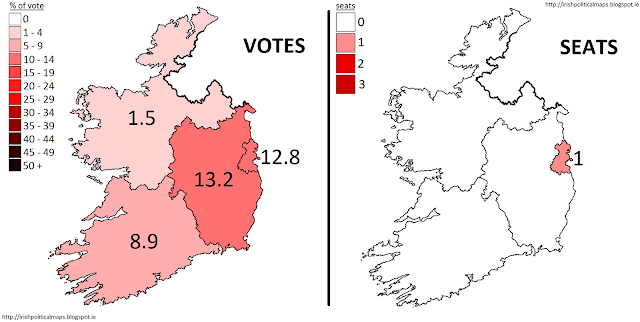 1984 had been a bad year for Labour. It had gone from having three MEPs to having none. While their vote did improve slightly in each constituency (bar Connacht-Ulster), Labour only regained a single seat in Dublin, with Barry Desmond. Michael Bell in Leinster, Eileen Desmond and Michael Ferris in Munster, and Ivan McPhillips in Connacht-Ulster were each unsuccessful. Labour's lack of success did not equate to a lack of support for leftist parties, however, as a further left party would show.
Workers' Party 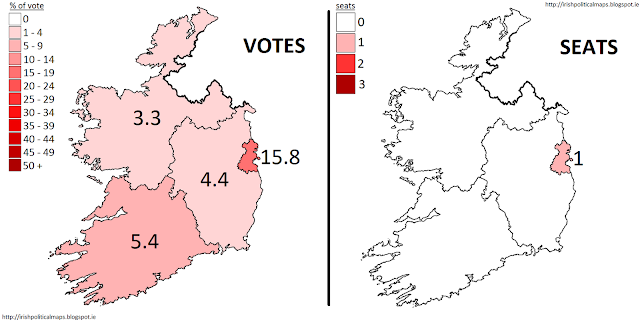 Having tried for ten years, the Workers' Party finally succeeding in winning a European seat this year, with Prionsias de Rossa in Dublin. This success coincided with that party's increasing fortunes in general elections. Seven Dáil seats were won in the 1989 general election, an increase of three from 1987. It seemed the Workers' Party was well placed to make a name for itself in Irish politics, as long as it stayed united, of course.
Independents 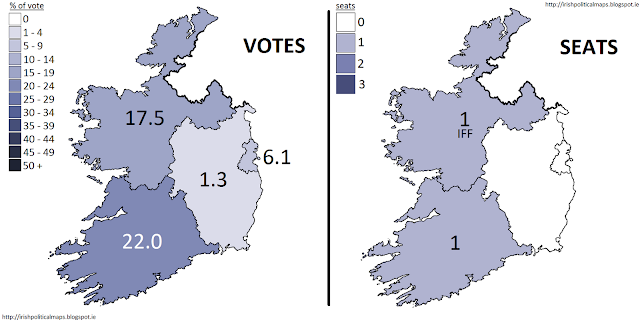 1989 was a good year for independents, with four being elected to the Dáil and two going to Europe. T.J. Maher easily held his Munster seat, while Independent Fianna Fáil's Neil Blaney regained his in Connacht-Ulster. The Eurosceptic economist Raymond Crotty ran in Dublin, as did Tim Cahill, but neither came near election. Leinster saw its first independent candidates, Cornelius de Groot and the former Fianna Fáil Minister Kevin Boland, both of whom performed very badly.
Green Party 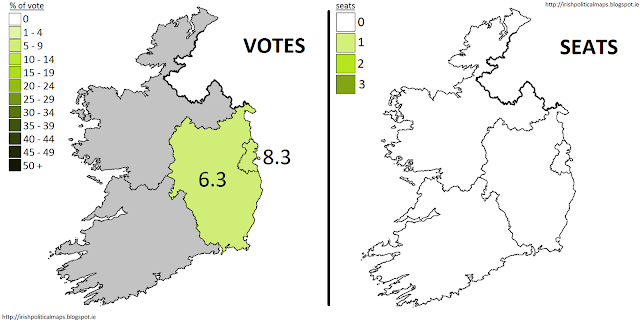 In the general election held on the same day, the Green Party won their first ever Dáil seat. Although they had no such success in this election, it was nevertheless a good election, with the vote shares enjoyed by the party being a huge improvement on the 1.9% it received (as the Ecology Party) in 1984. Trevor Sargent came fifth in Dublin, beating Mary Harney and being just two places away from being in with a chance for a seat, while Seán English performed quite well in Leinster. The Greens' fortunes were improving, and it seemed the next set of elections would produce an even better result for them.
Sinn Féin 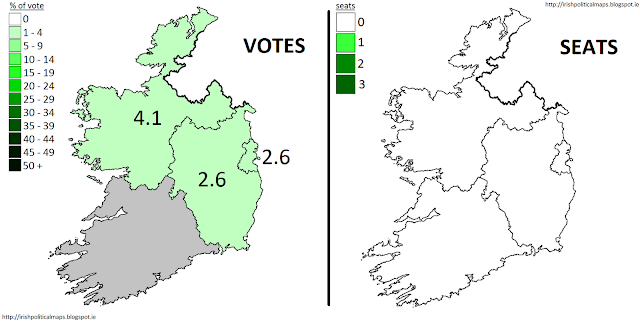 Unlike the Progressive Democrats and the Green Party, Sinn Féin was a small party which saw its fortunes decrease in this election. Its share was down across Connacht-Ulster, Leinster and Dublin, while it didn't even run a candidate in Munster. Sinn Féin had taken the unusual decision of running three candidates in both Connacht-Ulster and Leinster, but none came anywhere near winning a seat.