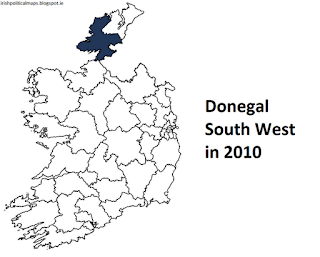 The politics of Ulster as a whole had been changing considerably since the 1990s. North of the border, the Democratic Unionist Party and Sinn Féin were respectively replacing the Ulster Unionists and the SDLP. The growth of Sinn Féin the western parts of Northern Ireland was huge, with the party easily becoming the dominant nationalist party there. This increase in support was bound to spill over the border, and it quickly began to do so in each general election since 1997. By late 2010, the huge unpopularity suffered by Fianna Fáil as a consequence of their actions in government, as well as the relatively small level of support traditionally offered to Fine Gael in that area, meant that there was a gap to be filled in Donegal. This gap had taken a physical manifestation with the election of Pat "the Cope" Gallagher to the European Parliament in June 2009. Gallagher had represented Donegal South West for Fianna Fáil between 1981 and 1997 and again from 2002 to 2009.


Donegal South West in the 2007 general election
The government delayed the holding of a by-election to fill the vacant seat continuously. The loss of a seat in Dublin South and the failure to win one in Dublin Central in the by-elections of 2009 had illustrated how public opinion was turning against Fianna Fáil. By 4 May 2010, nearly a year after the seat became vacant, Sinn Féin attempted to force the by-election by moving the writ in the Dáil. They were narrowly defeated by Fianna Fáil - two Fianna Fáil TDs accidentally voted with the opposition. Sinn Féin kept up their efforts, and in June SF Senator Pearse Doherty, who ran in the 2007 general election, was granted leave by the High Court for a judicial review into the government's delay tactics in holding the by-election. High Court President Justice Nicholas Kearns ruled that the government was "offending" the Constitution through their "unprecedented" delay in moving the writ.

Eventually, the government announced in early November 2010 that the by-election would be held on the 25th of that month. They also announced their decision to appeal Justice Kearns' ruling to the Supreme Court.


Donegal South West by-election, 25 November 2010
Doherty's exposure in the run-up to the announcement, as well as his efforts to see the by-election being called, led to a huge amount of support for him. He was widely expected to win the seat, and he topped the poll on the first count. Unlike in the last two by-elections, Fianna Fáil's Brian Ó Domhnaill came second, although they won just over half of the first preference votes won by Doherty. Fine Gael's Barry O'Neill came third. Fourth place went to independent left-wing candidate Thomas Pringle, while the Labour Party enjoyed a better than usual Donegal performance, with Frank McBrearty running as their candidate.
During the by-election campaign, the Taoiseach Brian Cowen announced that, in response to various pressures, he would call a general election in the early part of 2011. This prompted the other independent candidate, Ann Sweeney, to boycott the by-election and call it a "farce" coming so close to a general election. The voters of Donegal South West did not share her thoughts, with a turnout of 57%.
In that general election, Doherty was re-elected with an even bigger margin, while Fine Gael's Dinny McGinley also held his seat. The outgoing Tánaiste, Mary Coughlan, previously a poll-topper in the constituency, was roundly defeated by Thomas Pringle, ending any kind of Fianna Fáil representation in Donegal South West. The election of Pádraig Mac Lochlainn in Donegal North East signals that Donegal may go from being a Fianna Fáil stronghold to a Sinn Féin stronghold, a possibility enhanced by the increasing popularity of Sinn Féin both nationally and in the Ulster constituencies.
Posted by Jason Kelleher