For nearly fifty years, the government of Northern Ireland was dominated by the Ulster Unionist Party. This dominance was assured by a number of discriminatory measures against the Catholic, nationalist population. This discrimination manifested itself in many forms, particularly in the area of employment and housing, but it was also reflected in the manner in which elections themselves were conducted in Northern Ireland. The right to vote in local elections was based on the ownership of property. Those who owned more than one property had the equivalent number of votes. The constituencies by which Northern Ireland was electorally divided were heavily gerrymandered to benefit the UUP. All in all, as every general election from 1929 until this year showed, the political situation in the region was one of little change.

Change itself was becoming impatient, however. By the late 1960s, the Civil Rights movement had taken off, with members of the Catholic and nationalist communities demanding fairer governance, an end to discrimination, and crucially, "one man, one vote". This movement was met with significant resistance from hardline Unionists who feared that any concessions to the Catholic/nationalist population would lead to their ruin. This, however, was not quite the view of the Northern Irish Prime Minister, Terence O'Neill. In the years preceding this election, O'Neill had received the Taoiseach Seán Lemass at Stormont House, and had himself made a visit to Dublin. Hopes were high for a new era of co-operation between the two parts of Ireland. O'Neill was prepared to grant many of the Civil Rights demands, including "one man, one vote".

Unfortunately for O'Neill and for the Civil Rights movement, the hardline Unionist resistance was brought to bear on the Prime Minister as a result of his reforms. The UUP entered the 1969 general election a split party. 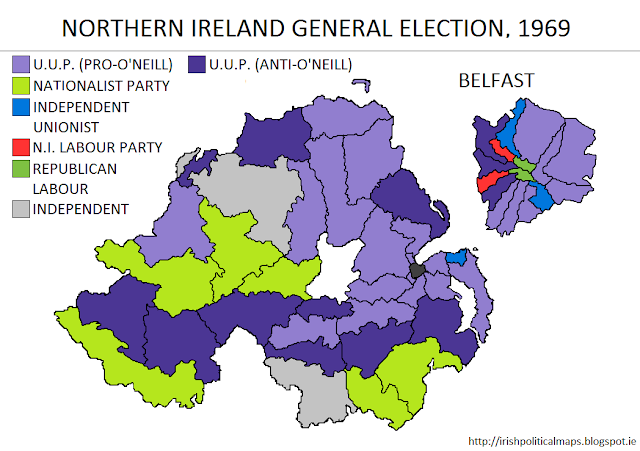 UUP MPs opposed to O'Neill won 13 seats, denying him an overall majority in parliament. There were problems on the Nationalist side too as some nationalist MPs, including John Hume, ran as independents. Independent Unionists won three seats, while the unionist NI Labour Party and the Republican Labour Party retained their Belfast presence.

O'Neill resigned as party leader and Prime Minister, having almost lost his own seat to an up-and-coming hardline unionist preacher, Dr. Ian Paisley. He was succeeded as Prime Minister by James Chichester-Clarke whose tenure saw the outbreak of overt violence between the two communities of Northern Ireland - the beginning of what became known as the Troubles - and continued unionist infighting.

By 1972, Brian Faulkner, one of the anti-O'Neill UUP MPs, had replaced Chichester-Clarke. He introduced internment without trial, which was heavily used against Catholics. However, by this point the UUP could not stop the advent of a new force of unionism. Dr. Paisley's new Democratic Unionist Party began to win by-elections between 1969 and 1972, with Paisley himself taking O'Neill's old Bannside seat. Another, more moderate unionist party, the Alliance Party of Northern Ireland, also began to make gains. This party would later grow to be neutral in the nationalist/unionist divide. 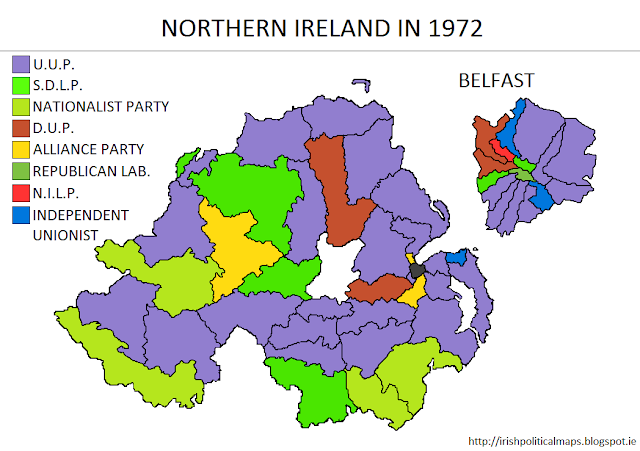 By 1972, the escalating violence and instability in Northern Ireland prompted the British Prime Minister Edward Heath to abolish the Stormont parliament and impost direct rule on Northern Ireland from Westminster. 52 years after the Government of Ireland Act which created it, Northern Ireland was once again under direct British control. Successive British governments, both Conservative and Labour, would try to solve the problems that had been ignored for so long in the region, both by themselves and by working with contemporary Irish governments. Each of their solutions over the next few decades operated on a single basic principle, that the situation which existed from 1921 until 1972 could not be allowed to happen again.
Posted by Jason Kelleher