Interviewed in 1969, the former Nationalist Party MP Eddie McAteer was asked about the outbreaking Troubles in Northern Ireland. He said that the fifty-year dam that had been building up had burst. Since the 1921 elections which created the first government of Northern Ireland, the Unionist majority had ruled without any interference, while the Nationalist minority was unable to accrue any significant political influence. The discrimination which existed against Catholics in Northern Ireland, symbolised even in the electoral boundaries used for these elections, had by now resulted in a growing anger amongst the Catholic population. In the mid 1960s, Nationalist figures would establish the Northern Ireland Civil Rights Association. By the end of the decade, UUP attempts to address those concerns would fracture even the Unionist community.

The 1962 election itself saw few hints of these oncoming crises. The UUP's position remained the exact same as it had since the 1920s, even with the loss of 3 seats. Notoriously anti-Catholic Prime Minister Basil Brooke (now Lord Brookborough) was elected for another term. He retired in 1963 and was replaced by Terence O'Neill. The Nationalist Party, although they won back Mid Tyrone from the UUP, continued to be stuck with an MP total less than 10. The other UUP losses went to the Irish Labour Party in Belfast Dock and the unionist Ulster Liberal Party in QUB. Independent Labour, Republican Labour and the Northern Ireland Labour Party each retained their seats from the previous election. 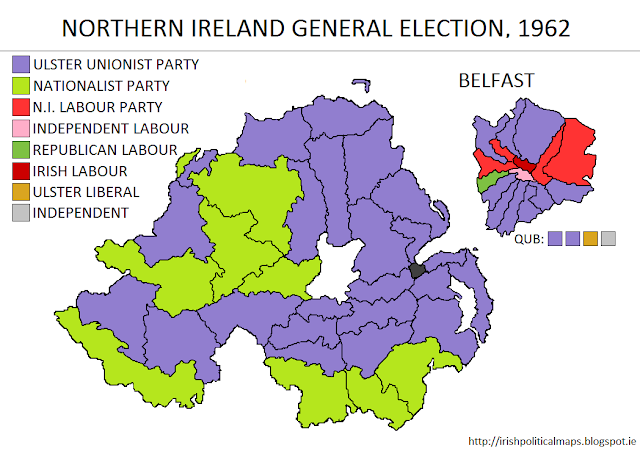