Ireland joined the European Economic Community (EEC) in 1973, after years of preparation by successive governments, as well as a referendum the previous year which saw an overwhelming majority of the population support EEC entry. For the first six years of its membership, Ireland's members of the European Parliament were appointed by the government. From 1979 onwards, member states' representation in the parliament would be decided by universal suffrage. Member states would be allocated a certain number of seats based on population. Ireland was awarded 15 seats in 1979, although that number has changed throughout the years.

Ireland was divided into four large constituencies, roughly corresponding to the division of the provinces. Dublin was a separate 4-seat constituency, while Leinster, Munster had five seats, while Connacht-Ulster had three. The latter consisted of the counties of Connacht and those of Ulster which were a part of the Republic of Ireland. The other six Ulster counties were the remit of the United Kingdom in this matter. Northern Ireland became its own constituency as part of the British allocation of European Parliament seats. It too returned 3 members. 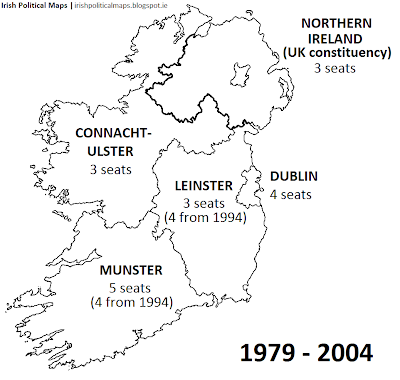 In 1994, Leinster gained and Munster lost one seat each, bringing them both to 4. The constituencies were altered in 2004. Northern Ireland and Dublin remained unchanged, but the other three were renamed (Leinster to East, Munster to South, and Connacht-Ulster to North-West) and each given 3 seats. As a result, Irish membership of the European Parliament was now at 13. The reduction of one seat in Dublin in 2009 saw that number fall to 12. 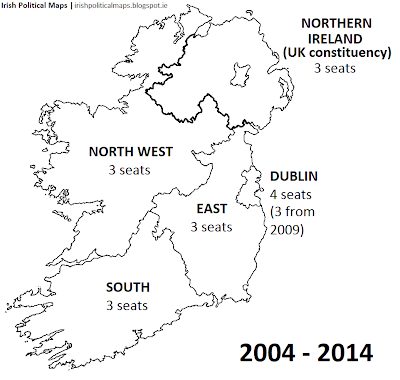 As well as the renaming and re-allocation of seats, the new North-West constituency gained County Clare from South, and Counties Longford and Westmeath from East. This configuration lasted until the next revision in 2013, which saw Ireland lose one seat as the European Parliament sought to balance the number of MEPs in the wake of Croatia's admittance into the European Union. 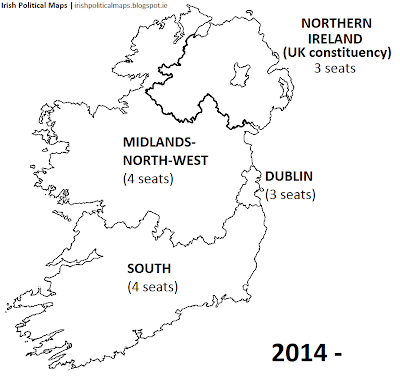