The 1950s saw Northern Ireland face much of the same problems as befell both the Irish and British governments in the area of the economy. While the newly declared Republic was deep within a recession, the economy of the North began to de-industrialise, resulting in a wave of unemployment amongst the working class, no matter what their background. This problem was not yet intense, however, by the time of the 1953 general election. As it had been for the five previous elections, the Ulster Unionist Party emerged dominant, even gaining a seat from their previous landslide victory. 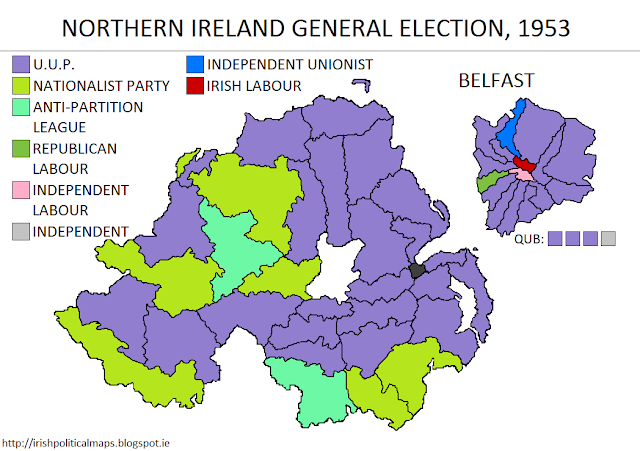 The constituencies are explained here.
On the nationalist side, the Nationalist Party saw its share fall by two seats, both of them taken by the Anti-Partition League, which had been founded in the previous decade by two former Nationalist MPs, Eddie McAteer and Malachy Conlon. In this election, Liam Kelly took Mid Tyrone, while Charles McGleenen won South Armagh. Despite this success, however, the League disbanded at the end of the decade due to internal difficulties.

Left-wing parties claimed a number of small victories in this election. The Irish Labour Party, which was at the time in a coalition government in the Republic, won the Belfast Dock seat. The new Labour MP, Murtagh Morgan, would retire at the next election. Belfast Falls went from Socialist Republican to Republican Labour as sitting MP Harry Diamond replaced the now defunct former party. Independent Labour MP Frank Hanna retained his seat.
Posted by Jason Kelleher