In 1914, the Government of Ireland Act was passed by the British parliament, finally granting Home Rule to the people of Ireland. After a decades-long campaign for Home Rule, the Irish Parliamentary Party had secured a major victory. However, despite being passed, the Act was never enacted.

The outbreak of World War I in July 1914 led to the postponement of the Act for twelve months. This postponement then became extended for the duration of the war. By the time the war had ceased in 1918, the situation in Ireland had changed irrevocably. Members of the Sinn Féin party, which had been established in 1905, campaigned not for Home Rule but for full independence from Britain. In 1916 members of Sinn Féin and the Irish Republican Army undertook the short-lived but pivotal Easter Rising, in which they declared Ireland a republic. The British government's execution of the rising's leaders in the aftermath resulted in huge shift in support from the Irish public to the republican movement, away from the IPP and  Home Rule. 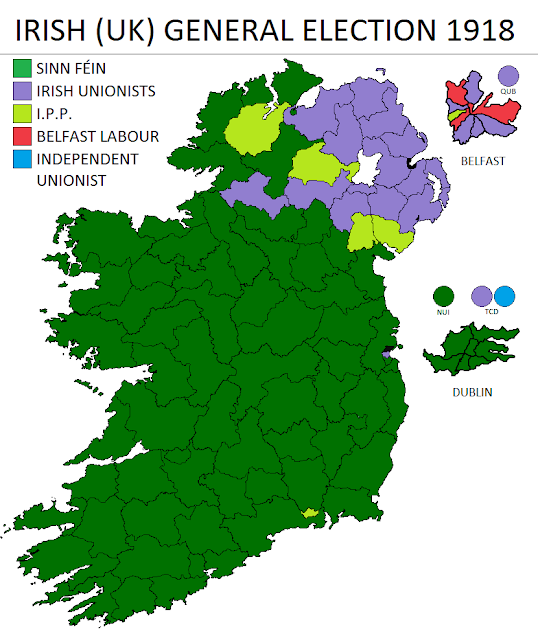 Sinn Féin's success in the election was phenomenal, essentially wiping the hitherto predominant Irish Parliamentary Party off the map. The only viable challenge to the republicans was the Unionist Party, which was concentrated primarily in north and east Ulster and some small areas of Dublin. The IPP lost 61 seats, returning just six. Only one of these seats was outside Ulster - party leader John Redmond's Waterford City. The Belfast Labour Party won three seats in what was soon to become the capital of a new political entity. The Irish Labour Party, established six years previously, declined to take part in this election.

The scale of the support for Sinn Féin was so great that they ran unopposed in 25 constituencies, concentrated primarily in western Munster and the midlands. Nationally, Sinn Féin's vote share was 46.9%, though it was higher than 80% in some contested areas. 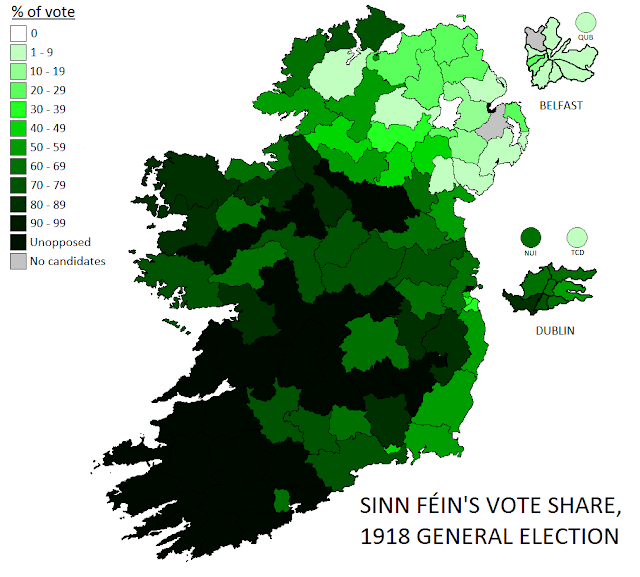 The Sinn Féin MPs refused to take their seats in Westminster and instead formed the first Dáil Éireann, an Irish parliament which would meet in Dublin. Although Sinn Féin intended for this Dáil to be open to the IPP and Unionist MPs as well, they refused to recognise the action and maintained their Westminster presence. It was to be the IPP's final general election.

The high Unionist presence in Ulster meant that Sinn Féin did not secure shares as high as they did elsewhere. The dominance of what was to become the Ulster Unionist Party and the opposition of unionists to Home Rule would result in the partition of Ireland when the successor to the 1914 Act, the 1920 Government of Ireland Act, was passed. Ireland would now be divided between Northern and Southern, the latter of which would became the Irish Free State and ultimately the modern-day Republic of Ireland.

The Sinn Féin party would ultimately split in 1921 on the Anglo-Irish Treaty and the 1920 Act. From this split came Cumann na nGaedheal, the first governing party of the Free State and origin of the present governing party Fine Gael, and Fianna Fáil, the historically dominant party in Ireland which in 2011 experienced the biggest loss of support for a major party in a general election since the IPP's downfall in 1918.
Posted by Jason Kelleher