Britain's first postwar elections brought with them some stark changes to the political landscape. Prime Minister Winston Churchill's Conservatives were swept from power, which came as a shock considering Churchill's huge role in Britain's victory. Clement Attlee's Labour Party formed the new government, the electorate seemingly putting more faith in their policies to rebuild a bombed and tired Britain.

As was now standard, the concurrent election in Northern Ireland saw an entirely different outcome. The dominance of the Ulster Unionist Party was not something likely to be influenced or changed by the events of the war, and indeed the map below looks very similar to its previous counterparts. What was notable about this election, however, was that it did at least follow Britain by featuring a slight move to the Left, even if this move did not result in seats. As well as the NI Labour Party, this election saw the introduction of Commonwealth Labour, the Federation of Labour, the Socialist Republican party and the NI Communist Party to Stormont politics.

Commonwealth Labour and the Federation of Labour were both splinter groups of the NI Labour Party which formed in 1942 and 1944 respectively. Commonwealth Labour was led by Harry Midgely, who had fallen out with the bigger party over his pro-British stance. Midgely met little success in this endeavour, being rejected by trade unionists and the British Labour Party. Commonwealth Labour disintegrated over the next two years, with many branches rejoining NI Labour and Midgely himself joining the UUP. The Federation of Labour, meanwhile, was a nationalist splinter group led by Jack Beattie. Like Midgely's attempt, the Federation was unsuccessful. It merged with the newly Northern-involved Irish Labour Party in 1949.

The Socialist Republican party was borne of former members of both the Nationalist Party and the IRA. While they would enjoy slight success in this election, they too ended up merging with Irish Labour. The Communist Party meanwhile had split from the larger Irish counterpart, and was contesting its first election. Though it predictably won no seats, it played its own role in Northern Irish politics by influencing the trade unions and the IRA, eventually also controlling Northern Ireland Civil Rights Association two decades later.

This increase in left wing parties posed something of a threat to NI Labour, which nonetheless was prepared for the election. The Nationalist Party appeared ready to break out of its rut of the previous decade, fielding 11 candidates. The Ulster Unionist Party, secure in the knowledge that it would win the election, ran 41. 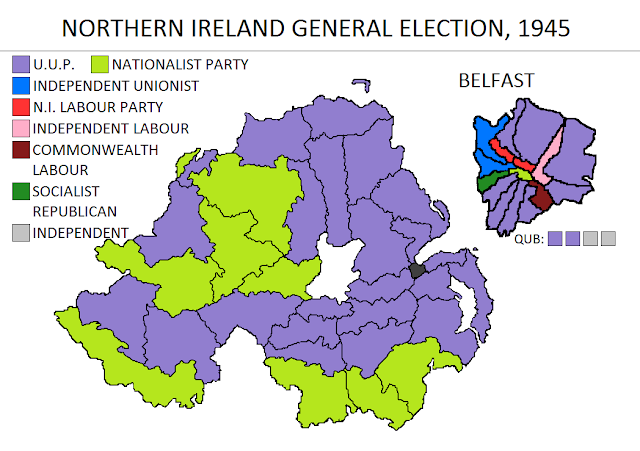 The results show little change to what came before. Though they retained their majority, the UUP was stunned by the loss of 6 seats, including one to the Nationalists in South Down. Commonwealth Labour and the Socialist Republicans took a seat each in Belfast, while two of the UUP's Queen's University MPs broke from the party and won re-election as Independents. The NI Labour Party's loss in South Armagh was offset by gains in Belfast from the UUP, while Independent Labour retained its Pottinger seat.
In terms of vote shares, NI Labour overtook the Nationalist Party as the second most popular party, winning twice the amount of votes (18% to 9%). Despite this, the nationalist vote did increase by 4%, while the UUP's share dropped by 6% to 50%. While the election made little material difference to the governing of Northern Ireland, the results did show that change, however gradual, was possible.
Posted by Jason Kelleher