In 1997, the Progressive Democrats rejoined Fianna Fáil in coalition, having sat in the Opposition benches for the last five years, first under a Fianna Fáil-Labour coalition, then the so-called Rainbow Coalition of Fine Gael, Labour and the Democratic Left. This return to government would last for the rest of the PDs' existence. Their seat share had dropped back down to 4, but their vote share remained the same at 4.7% and the party still enjoyed the honour of their new leader Mary Harney becoming Ireland's first female Tánaiste. Five years later, with the coalition government proving very popular, the PDs gained back 8 seats, though their vote dropped by 0.7% they were helped by transfers from Fianna Fáil.

However, this was to be the party's final hurrah. The 2007 general election, though a success for Fianna Fáil, was devastating for the PDs. They lost all but two seats - Galway West TD Noel Grealish and Dublin Mid West TD Mary Harney - and their vote plummeted to 2.7%. The party's newest leader Michael McDowell was not returned. The party remained in coalition with Fianna Fáil and now the Green Party in addition. With their support all but evaporated, the Progressive Democrats dissolved in 2009. Harney and Grealish became Independent TDs, while the party's final leader Senator Ciarán Cannon joined Fine Gael in time for the 2011 general election.

The party lasted 22 years, 15 of which were in coalition with Fianna Fáil, the very party it broke away from. As the junior partner in the coalition governments, it was far more vulnerable than Fianna Fáil, and far easier for dissatisfied voters to punish. This would be seen again with the fate of the Green Party in the 2011 general election. 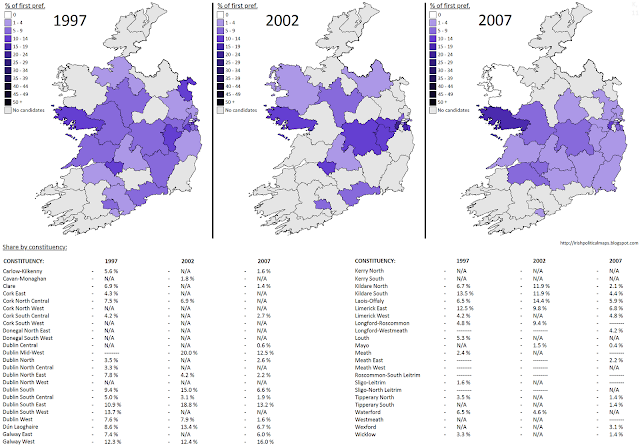