The office of President was created by the constitution, Bunreacht na hÉireann after its ratification by the people in 1937. Douglas Hyde became Ireland's first President a year late, the first Irish Head of State not connected with the British monarchy.

The office is an entirely ceremonial one - the President signs bills into law, receives official visitors and represents Ireland on state visits abroad. He or she must remain apolitical - party affiliations become moot once a candidate is elected to the office. If he or she chooses, the President can call a meeting of the Council of State to deliberate whether new bills are in keeping with the constitution.

Below is a timeline, beginning with the establishment of the Oireachtas in 1919, showing the careers of the nine men and women to have been President of Ireland to date. 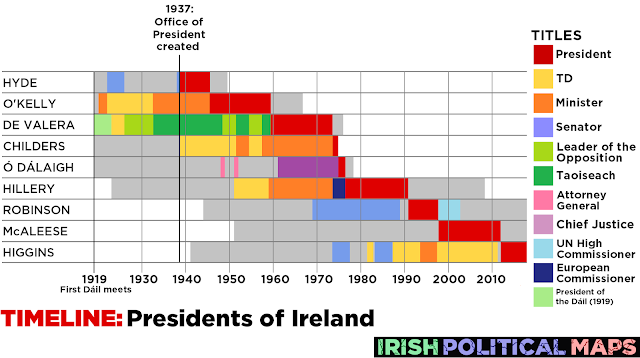